Pic: Here's the X-ray that shows Neymar's broken back

We're not doctors, but this looks bloody painful.

We all woke up to the news this morning that Neymar's World Cup is over. A knee in the back from Colombia's Juan Zuniga saw the 22-year-old leave the field on a stretcher and the Brazilian team doctor confirmed overnight that the talisman had suffered a broken vertebra, meaning he would have to spend at least six weeks on the sidelines.

The Barcelona star is reported to have returned to the Brazilian training camp but there were still emotional scenes at Rio airport as he boarded an ambulance while the rest of his team hopped on the bus.

Brazilian TV also showed the X-ray of his injury, which very clearly shows the break in his back, as posted on the Daily Mail. 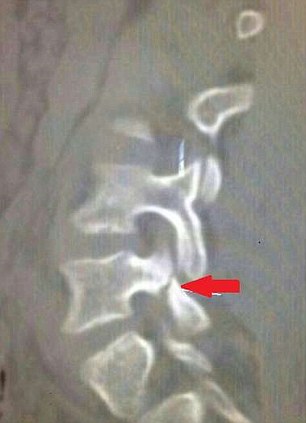 All we can say is get well soon Neymar, this World Cup will really miss you.

popular
One of the best movies of the decade has just been added to Netflix
Starbucks worker breaks down in tears after they're scheduled to work 8 hours
Cristiano Ronaldo 'agrees £173m-a-year deal' with Saudi club
Man dies after falling into wood chipper outside Christmas lights display
What the hell is 'Stomp and Holler', and why does Spotify insist that you love it?
The latest Star Wars episode is directly based on an IRA funeral
One of the scariest films of all time is among the movies on TV tonight
You may also like
4 days ago
World Cup 2022 Day Six: All the major action and talking points
4 days ago
Japan fans explain why they clean up after World Cup matches
5 days ago
The JOE Friday Pub Quiz: Week 322
6 days ago
Japan supporters clean up rubbish following famous win over Germany
6 days ago
ITV football pundit Nadia Nadim heartbroken as mother killed by a truck
1 week ago
Non-league side make approach for 37-year-old free agent after World Cup
Next Page