Pic: Is this the longest journey between two GAA clubs in the one county in all of Ireland?

If it's not the longest, it has to be close.

If you play GAA and if you live in one of the bigger counties in Ireland, then long journeys to and from club games are a fact of life.

Given the size of Donegal, it's understandable that players in the county have to put up with it more than most.

END_OF_DOCUMENT_TOKEN_TO_BE_REPLACED

That said, we were still taken aback at the length of journey that players from Carndonagh will have to embark upon for a championship encounter with Glencolumbkille this weekend.

Carndonagh player Christy McLaughlin got in touch with us today to highlight the 280km round trip he and his teammates will take to play the match, a journey that, according to Google Maps, will take the best part of four hours and 40 minutes there and back. 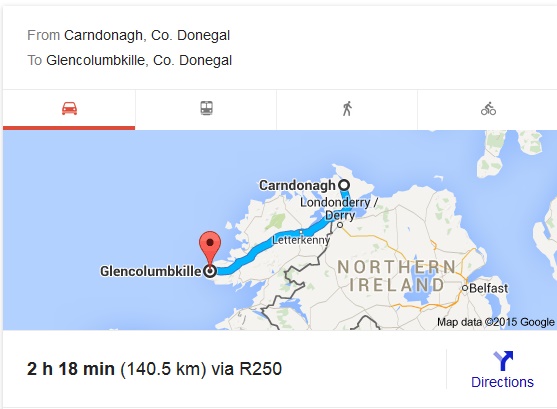 If that wasn't bad enough, Christy lives and works in Dublin during the week and by the time the weekend is over and he's back in the big smoke, he'll have travelled some 850km for the cause.

What Christy wanted to know and what we're also intrigued to find out is if there is a longer journey between two club teams in the country?

Cork, Galway and Mayo, for example, are all larger than Donegal in area and Kerry and Tipperary aren't far behind.

Do you know of a journey that's even longer than the one Christy will undertake this weekend?

The Big Reviewski || JOE · The Big Reviewski with Dune, a mini-Hangover reunion & the best of Timothée Chalamet
popular
One of the best thrillers of the decade is among the movies on TV tonight
The full list of all the new shows and movies coming to Netflix in November
The JOE Movie Quiz: Week 125
Vin Diesel walked Paul Walker's daughter down the aisle
PICS: The man with the biggest penis in the world has one unbelievable problem with it
The 50 most iconic songs of all time* have been revealed
The cast of Succession on the most ridiculously expensive scene in the show
You may also like
2 weeks ago
Wicklow GAA to investigate fight after Under 15 match on Saturday
1 year ago
Post-match celebrations and a lack of social distancing at certain events put club game on hold
1 year ago
Cork GAA pleads with clubs and supporters “not to engage in celebrations that breach current guidelines”
1 year ago
What's the Bronco test and why it may come up in conversation this week
1 year ago
The Andy Moran GAA Isolation Workout
1 year ago
SuperValu, Centra and the GAA team up on initiative to support elderly people
Next Page