Pic: Jim McGuinness is getting right behind Sergio Garcia at the Ryder Cup

The Ryder Cup is in full swing (wahey) at Gleneagles as Europe and the US go head-to-head and as always with these big sporting events, some big names have turned out to watch the action.

The match of the day is Rory McIlroy and Sergio Garcia versus Keegan Bradley and Phil Mickelson with the majority of the gallery following those four men around the course.

END_OF_DOCUMENT_TOKEN_TO_BE_REPLACED

However, there's one man who has grabbed the attention from the four pros and that's none other than Donegal football manager Jim McGuinness.

McGuinness has been allowed inside the ropes and he's following the match very, very closely and if this picture is anything to go by, he's right behind Team Europe, literally... 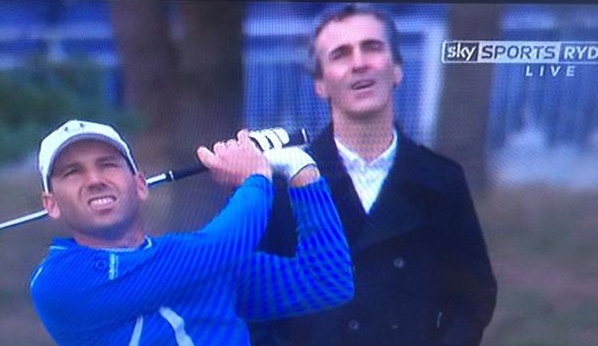 popular
New Netflix series looks like a must-watch for fans of Drive to Survive
The JOE Friday Pub Quiz: Week 279
The full list of all the new shows and movies coming to Netflix in February
The 50 most iconic songs of all time* have been revealed
Jenny Greene to leave RTÉ 2FM's Drive Time to host new show
Gardaí release CCTV footage of last known whereabouts of Bernadette Connolly
Here's the line-up for this week's episode of The Graham Norton Show
You may also like
2 weeks ago
Netflix to create Drive to Survive-style series around the PGA Tour
4 months ago
Golf's version of Drive to Survive is reportedly coming to Netflix in the very near future
11 months ago
Fine Gael senator says golf and sea-swimming restrictions should be lifted
2 years ago
"Very chaotic" - Irishman describes being struck by lightning on US golf course
2 years ago
Irishman hospitalised after lightning strike on US golf course
2 years ago
Shane Lowry given a hero's welcome in his hometown of Clara, Co. Offaly
Next Page