The FAI chief has come to the rescue.

This week we brought you the annoying news that debit cards would not be accepted for those applying for tickets to Euro 2016. Thankfully, the FAI Chief John Delaney has rectified that problem.

Delaney has met with UEFA in Switzerland and both parties have come to an agreement which allows debit cards to be used when applying for Euro 2016 tickets. 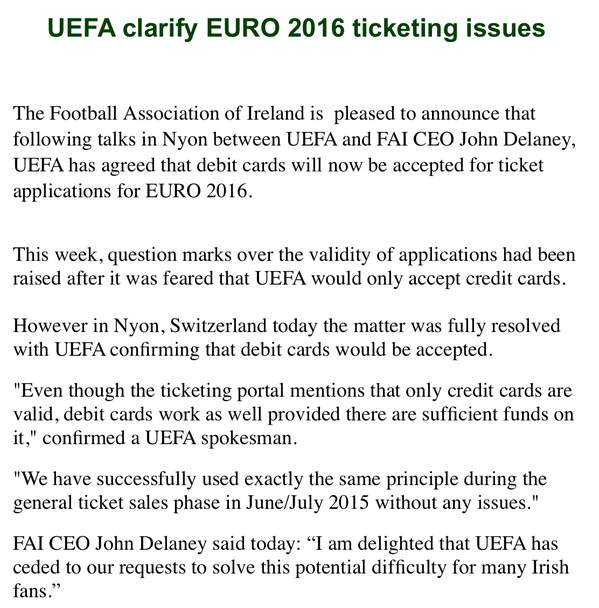 END_OF_DOCUMENT_TOKEN_TO_BE_REPLACED

The FAI CEO's words will be music to the ears of Irish fans hoping to travel to France this summer:

"I am delighted that UEFA has ceded to our requests to solve this potential difficulty for many Irish fans."

The FAI took to Twitter to confirm the great news, so if you're planning a big trip you will definitely want to read this.

popular
One of Keanu Reeves' best movies has just been added to Netflix
The 50 most iconic songs of all time* have been revealed
QUIZ: Can you get full marks in this General Knowledge Quiz?
Just in time for Christmas, all eight Harry Potter movies are now available to stream at home
QUIZ: Can you get 20/20 in this desperately tricky capital cities quiz?
QUIZ: Can you get 12/12 in this snappy General Knowledge quiz?
The JOE Friday Pub Quiz: Week 272
You may also like
1 month ago
The JOE Friday Pub Quiz: Week 264
3 months ago
Manchester City's Benjamin Mendy charged with four counts of rape
3 months ago
Michael Ballack’s son Emilio, 18, dies in 'quad-bike crash’
4 months ago
Five football documentaries to watch to kill time before the new Premier League season
5 months ago
Christian Eriksen stable but may not play football again, says sport cardiologist
7 months ago
Ryan Giggs charged with assaulting two women and controlling or coercive behaviour
Next Page