The Lions players couldn’t wait to get a snap with James Bond himself, Daniel Craig, in the dressing room after beating the Wallabies today but Manu Tuilagi decided to have a bit of fun at his expense.

Craig was quite prominent on the pitch and in the dressing room congratulating the Lions players on their emphatic victory in Sydney today, leading to some describing him, quite harshly perhaps, as the John Terry of the Lions celebrations afterwards.

Quite a number of Lions players seemed very keen to get a picture with Craig in the dressing room, but Manu Tuilagi wasn’t going to be happy with just that and instead decided to hit 007 with the most traditional form of photo-bomb, the old two fingers behind the head trick. 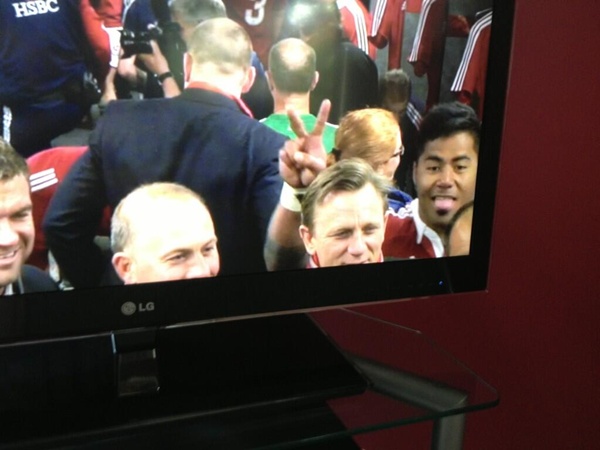 Mind your back Manu, not many people f**k with Bond and get away with it.

Lions coverage on JOE brought to you in association with Kellogg’s, official cereal & snack provider to the IRFU.

popular
Australian woman stuck with Irish accent after tonsil surgery
QUIZ: How many of these characters from The Simpsons can you name?
Two children, aged 3 and 4, hospitalised after consuming suspected cannabis jellies
9-year-old boy killed by lightning strike while playing football
Assassin's Creed director on why Ireland is the perfect setting for their new game
Alastair Campbell accidentally announces death of The Queen live on GMB
Penneys issues statement after shoppers try to sell appointments for €100
You may also like
2 months ago
Craig Casey and Johnny Sexton combination backed for Italy clash
3 months ago
Defence grows for Billy Burns after one of the roughest days of his rugby career
3 months ago
Major upside to Ireland's Six Nations challenge that should make all the difference
3 months ago
John Cooney comes to defence of JJ Hanrahan after kicking criticism
4 months ago
Cardiff conversation that proved Paul O'Connell always put the team first
4 months ago
Ian Keatley on Ronan O'Gara's deadpan advice and his most treasured Munster jersey
Next Page