She’s since deleted the tweet, but these things have a habit of making their way into the public domain.

The Manchester United midfielder came in for criticism from Roy Keane on ITV following United’s disastrous 2-0 defeat to Olympiacos last night, not, surprisingly enough, for his sub-standard individual display but for a post-match interview in which he answered questions about the team’s performance in a fairly bland manner that Keane thought was symptomatic of United on the night.

In Carrick’s defence, players rarely give much away in post-match interviews under any circumstances, but Keane thought he should have displayed a little more passion at least and his comments were the subject of plenty of debate on Twitter afterwards. 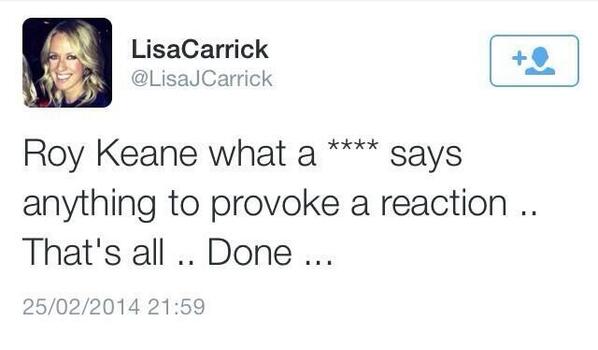 END_OF_DOCUMENT_TOKEN_TO_BE_REPLACED

We’re not sure if Carrick would have appreciated the extra attention on what was a pretty miserable night as it was, but maybe he’ll feel that things can only possibly get better for him and for United after reaching the latest in a series of new lows last night.

We’ve heard that before, mind.