PIC: Offaly GAA star prevents woman from getting clamped in Dublin and gets a date for his efforts

Chivalry is alive and well in the Faithful County.

Nobody likes getting clamped and unless you harbour a particular dislike for a certain individual or they are blatantly breaking the law, it’s not something you like to see happen to fellow motorists either.

When Offaly GAA star Paraic Sullivan, who last year spoke of his struggles with a cruciate injury to SportsJOE.ie, parked his car near the Criminal Courts of Justice near the Phoenix Park on Tuesday, he noticed that an unoccupied car in front of him was about to get clamped.

Ever the gentleman, Paraic stepped in, bought a parking ticket and saved the car from being clamped and then left a note with his phone number suggesting that the fortunate motorist might buy him a pint as a reward. 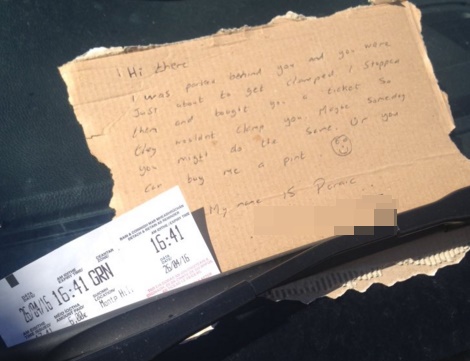 END_OF_DOCUMENT_TOKEN_TO_BE_REPLACED

In case you can't make it out above, the note reads as follows...

I was parked behind you and you were just about to get clamped. I stopped them and bought you a ticket so they wouldn't clamp you. Maybe some day you might do the same. Or you can buy me a pint.

My name is Paraic.

It turned out even better for Paraic, as the stranger (a woman whose name we have removed) sent him a text later in the afternoon thanking him for his generosity.

She also suggested that they meet up so she can repay him for his kindness. 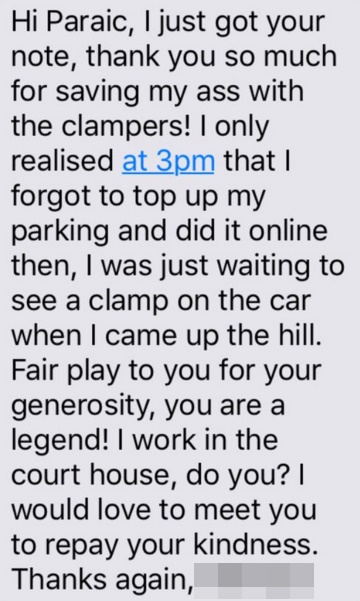 END_OF_DOCUMENT_TOKEN_TO_BE_REPLACED

It’s anyone’s guess as to where the relationship will go from here, but who knows, it could be one hell of a story to tell the grandkids.

Cheers to Wexford GAA legend Matty Forde for sending this our way. Got a story for JOE? Hit us up on Facebook or Twitter, send it to our WhatsApp number 087-4001102 or mail editorial@JOE.ie.

The Big Reviewski || JOE · The Big Reviewski with Andy Serkis, Squid Game follow-ups & the return of Succession
popular
Nigel Farage has been saying republican phrases again, but in reality, he's the one laughing
Gardaí will be out in force pulling for speed this week
How to lower your cholesterol - 5 really handy tips
Largest aircraft in the world touches down at Shannon Airport
The cast of Succession on the most ridiculously expensive scene in the show
An underrated Denzel Washington thriller is among the movies on TV tonight
Ranking all of Christopher Nolan's movies from worst to best
You may also like
2 hours ago
6 deadly Dublin spots to get your cocktail and culture fix this autumn
3 days ago
Investigation launched after window smashed at Canada Goose store in Dublin
3 days ago
Emergency services rush to high-rise building on fire in Tallaght
5 days ago
Motorcyclist in his 20s dies following two-vehicle collision in Dublin
6 days ago
Two men arrested and firearm seized during search operation in Dublin
1 week ago
Buying a home in Dublin, Meath, Kildare or Wicklow? Don't miss this free virtual mortgage advice event
Next Page