As well as being a bloody good rugby player on the pitch, Paddy Jackson might just be our favourite Irish rugby player off of it.

The Eoin McLove lookalike has always struck us as a bit of craic and only confirmed as much with his brilliant lip-syncing of the JCB song and his unforgettable Kanye and Jay-Z duet with Simon Zebo on the Irish tour of the US last year.

END_OF_DOCUMENT_TOKEN_TO_BE_REPLACED

Today, he had a special Christmas message for his Facebook followers and while the Lord of the Rings theme throughout was touching and very well-said, the picture at the end of Jackson mimicking another lookalike, Merry Brandybuck, alongside Pippin Took is just inspired. 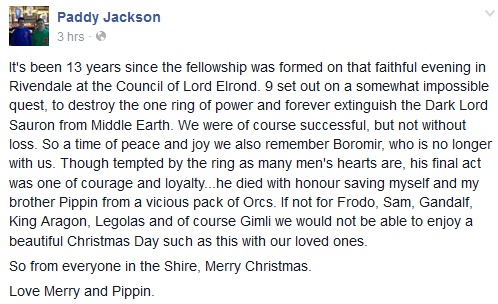 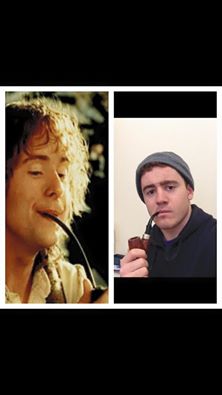 The Big Reviewski || JOE · TBR Spotlight: The Falcon and the Winter Soldier Episode Five - 'Truth'
popular
The 50 most iconic songs of all time* have been revealed
QUIZ: Can you answer all of Sinead and Daniel's questions on the Irish Celebrity Who Wants to be a Millionaire?
People think they've figured out the ranking of the viewers on your Instagram Stories
PICS: The man with the biggest penis in the world has one unbelievable problem with it
The JOE Friday Pub Quiz: Week 239
The Falcon and the Winter Soldier has the most powerful scene in MCU history
QUIZ: You'll find it hard to name all these towns from their Irish name (part 2)
You may also like
2 days ago
Fast & Furious 9 director talks set pieces too big and too crazy for the franchise
3 days ago
The cast and director of Fast & Furious 9 discuss setting a sequel in Ireland
4 days ago
WATCH: Army Of The Dead gives us smarter, faster zombies (and also a zombie tiger)
5 days ago
Wild Mountain Thyme will be available to watch at home in Ireland this month
1 week ago
20 of the best animated movies you can watch at home right now
1 week ago
WATCH: Angelina Jolie stars in intense fire-fighting movie Those Who Wish Me Dead
Next Page