PIC: People are talking about this Roscommon politician's views on the GAA pitch switch

This is dividing people's opinions.

Many GAA fans were in uproar over the weekend when Roscommon's Allianz Football League match with Dublin, scheduled to be played at Hyde Park in Roscommon, was moved to Páirc Seán Mac Diarmada in Carrick-on-Shannon at the eleventh hour.

The debacle even inspired an immediate sketch, while the anger among supporters forced to change their travel arrangements at the last minute simmered throughout the day.

The latest figure to weigh in on the incident is Roscommon politician Ivan Connaughton, who took to Facebook to post this message.

Surprised to hear the Dublin supporters complaining about a bus costing €10. In fairness Roscommon County Board do not...

Unsurprisingly, his comment has got quite a few people talking.

Connaughton responded to some of the replies... 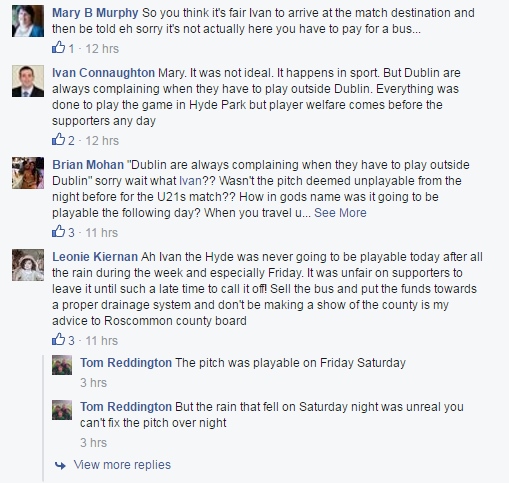 Where do you stand on this debate?

popular
Seven more suspected cases of unexplained hepatitis in Ireland under investigation
Netflix has just quietly added 12 big movies to its library
Gardaí investigating firearm being discharged near film set in Donegal
Tipperary woman banned from keeping dogs following animal cruelty conviction
Amazon Prime Video has just added 21 big movies to its library
Derry Girls fans in bits following emotional season finale
Has anyone seen Mr Tayto?
You may also like
1 week ago
Limerick hurler arrested following alleged altercation with Tipperary player in Limerick pub
4 weeks ago
Woman in her 20s dies after accident during Camogie match
7 months ago
Wicklow GAA to investigate fight after Under 15 match on Saturday
1 year ago
Post-match celebrations and a lack of social distancing at certain events put club game on hold
1 year ago
Cork GAA pleads with clubs and supporters “not to engage in celebrations that breach current guidelines”
1 year ago
What's the Bronco test and why it may come up in conversation this week
Next Page