Newly-crowned Premier League champions Leicester City will celebrate their success with the Premier League trophy following their game against Everton on Saturday evening.

Robert Huth, who has been a rock at the back for the Foxes all season, is suspended for the encounter after a tangle with Marouane Fellaini at Old Trafford last weekend, but he’s not going to let that put a dampener on his celebrations.

The German is always good for a laugh and he decided to have a cheeky dig at his former Chelsea colleague John Terry before the celebrations get underway in earnest later this evening.

We hardly feel the need to point out what Huth is referring to, but just in case you didn't know, here's Terry celebrating Chelsea's 2012 Champions League victory in Munich in his full kit, despite the fact that he was suspended for the game. 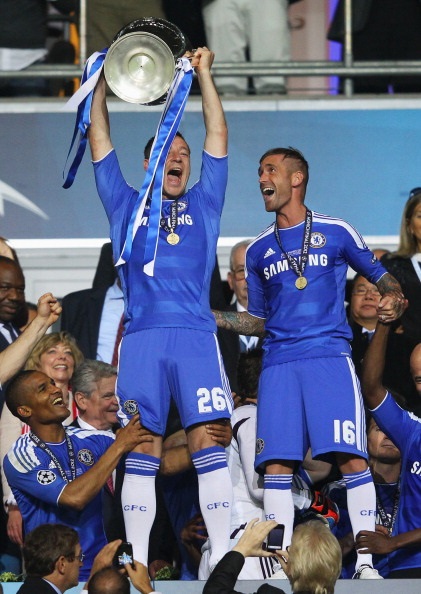 The Big Reviewski || JOE · Wonder Woman 1984 star Kristen Wiig & director Patty Jenkins on comedy, Cats & handsome Irishmen
popular
QUIZ: Can you name the Marvel Cinematic Universe film from just a single screen shot?
QUIZ: Can you pass your driving test and guess the meaning of all these road signs?
The JOE Movie Quiz: Week 85
The JOE Friday Pub Quiz: Week 226
QUIZ: Can you recognise each of these iconic Dublin pubs?
QUIZ: Can you correctly identify these European country flags?
QUIZ: Can you guess the drink from its can?
You may also like
2 days ago
A documentary about Pelé is coming to Netflix next month
5 days ago
Mum's anger at state of £30 free school meals package in the UK
2 weeks ago
UK records highest daily total of new Covid-19 cases
1 month ago
EA Sports respond to 'baseless' lawsuit over alleged scripting in FIFA 21
1 month ago
Horrific F1 crash sees driver emerge unscathed with car engulfed in flames
1 month ago
Jurgen Klopp argues with BT Sport interviewer over kick off times
Next Page