Pic: Roscommon man hijacks Mayo All-Star photo to make it look as if he won one too

It’s been over a week since the All-Stars so we’re a little late to the party with this one but we thought it too good not to bring to your attention.

How many All-Stars awards did Mayo win this year? Four, right? We’re pretty sure that was the case but a couple of photos taken at the ceremony in Croke Park last weekend would seem to suggest that the Green and Red had a fifth member on the team and one that mightn’t be as familiar to GAA fans as Keith Higgins, Lee Keegan, Colm Boyle and Aidan O’Shea.

As it turns out, the man in question, Ross Nolan, isn’t even from Mayo but Roscommon but as a guest of his former Ballyhaunis schoolmate and close friend Keith Higgins, he took the opportunity to pose for a photo that he’ll certainly be talking about for years to come.

END_OF_DOCUMENT_TOKEN_TO_BE_REPLACED

It is tradition at All-Star ceremonies for award winners from the same county to pose together for a picture afterwards and as Ross was close by when the Mayo photo was being taken, he was dragged in by the four Mayo All-Stars to make it appear as if he was amongst equals. 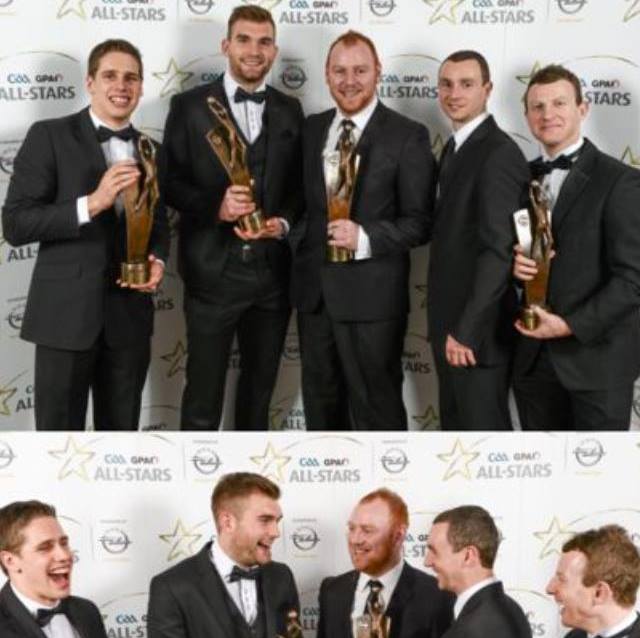 Acting as if there was nothing at all amiss, Ross posed for one fairly serious looking photo first before everyone involved had a good laugh at the little stunt they had just pulled, particularly Colm Boyle, who as you’ll see above, seemed to be on the verge of cracking up during the initial photo.

Ross has already used the photo for his Facebook and Twitter profile pictures and we’re sure he’ll be framing it and putting it up on the wall as well because it’s a beauty.

popular
People want "offensive" Crown Paints advert banned after attracting hundreds of complaints
Here's how to make €9-11 on Revolut in just a few minutes
New car-free town with population of 85,000 set to be built in Dublin
Human remains found in suitcases are the bodies of two children
QUIZ: Can you identify the famous song from the opening line?
The prequel to one of the best twists of all time and 7 more movies & shows to watch this weekend
Arrest made after shop robbed at knifepoint in Dublin
You may also like
1 month ago
Looking for a hotel room for the All-Ireland Final weekends? It won't come cheap...
1 month ago
Taoiseach condemns "disturbing" fight at Galway v Armagh game
2 months ago
The 2 Johnnies share unbelievable catfish ordeal affecting over 40 people
3 months ago
Limerick hurler arrested following alleged altercation with Tipperary player in Limerick pub
3 months ago
Woman in her 20s dies after accident during Camogie match
10 months ago
Wicklow GAA to investigate fight after Under 15 match on Saturday
Next Page