Pic: Sky Sports thought that Heisenberg from Breaking Bad was playing hurling for Kilkenny on Sunday

The star of Breaking Bad was reportedly all over the breaking ball… bitch.

Because the launch of their GAA coverage was so high-profile, every mistake made by Sky Sports has been covered to the nth degree so far, but they made easily their most amusing error on GAA Championship Review tonight, an hour-long highlights programme covering all the weekend’s action.

The epic clash between Kilkenny and Galway was obviously the focus of plenty of attention, but unfortunately for Sky, it was spoiled somewhat by a graphics error that mistook 2012 All-Ireland Final star Walter Walsh for fictional crystal meth kingpin and all-round ruthless son of a bitch Walter White. 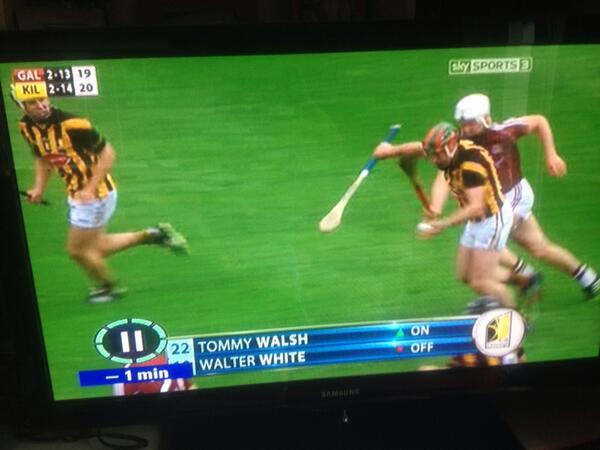 END_OF_DOCUMENT_TOKEN_TO_BE_REPLACED

In fairness to the person responsible it was an easy enough mistake to make, especially if they’re a Breaking Bad fan. We’re sure once Walter Walsh hears about it, it won’t happen again, however, especially if he takes the lead from Heisenberg himself…

Hat-tip to Peter Doyle for sending this one into us

popular
Netflix has just added 33 very big movies to its library
Increase in passenger charges at Dublin Airport may be on the way
Government considering giving public €200 again to assist with rising energy costs
The full list of cancelled flights in and out of Dublin Airport on Monday (so far)
The long-awaited MetroLink is finally happening, for real this time, honest
The most inexplicable prequel of all time has just arrived
Waterford man sentenced to three months imprisonment for operating "cruel and illegal" puppy farm
You may also like
1 week ago
Taoiseach condemns "disturbing" fight at Galway v Armagh game
1 month ago
The 2 Johnnies share unbelievable catfish ordeal affecting over 40 people
1 month ago
Limerick hurler arrested following alleged altercation with Tipperary player in Limerick pub
2 months ago
Woman in her 20s dies after accident during Camogie match
8 months ago
Wicklow GAA to investigate fight after Under 15 match on Saturday
1 year ago
Post-match celebrations and a lack of social distancing at certain events put club game on hold
Next Page