Pic: The ages of all of last night’s Manchester United team when Ryan Giggs made his debut

Just to apply some perspective to his age-defying performance last night.

Ryan Giggs’ longevity has been the subject of plenty of tributes in recent years and Manchester United fans were queuing up to pay homage to the 40-year old veteran again last night after a vintage display that inspired the Red Devils to a 3-0 victory over Olympiacos and qualification for the Champions League quarter-finals.

Granted, the opposition weren’t the Mae West and it says a lot about United in their current state that they’re relying on a 40-year old who has barely played since the turn of the year to bail them out, but Giggs still deserves massive credit for a performance of energy and vigour and for playing a huge part in two of United’s goals.

END_OF_DOCUMENT_TOKEN_TO_BE_REPLACED

That he is still going strong 23 years after his Manchester United debut is a testament to the man and that achievement is put into perspective when you consider the age of his team-mates when he made his first appearance in a United shirt in March 1991.

The below graph (Anni = years, mesi = months) contains one mistake as Phil Jones wasn’t born until 11 months after Giggs’ debut, but it still makes for remarkable reading. 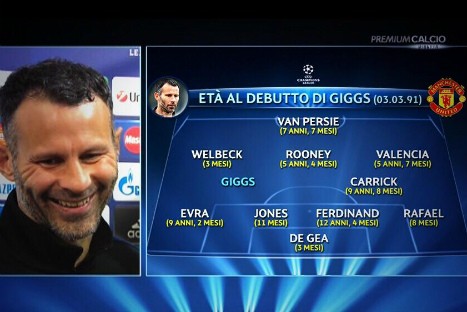 David de Gea, Rafael and Danny Welbeck, for example, were still in nappies, Wayne Rooney and Robin van Persie were still well short of double figures and the eldest of the players who played alongside Giggs last night, Rio Ferdinand, was still a few months away from becoming a teenager.

As anyone who’s been in a GAA dressing room will know, comparing ages with teammates is one way to make a man feel old, but Giggs certainly didn’t look it last night.

The Big Reviewski || JOE · The Big Reviewski with Andy Serkis, Squid Game follow-ups & the return of Succession
popular
Nigel Farage has been saying republican phrases again, but in reality, he's the one laughing
Ranking all of Christopher Nolan's movies from worst to best
How to lower your cholesterol - 5 really handy tips
The 100 greatest TV shows of the 21st century have been revealed
Largest aircraft in the world touches down at Shannon Airport
An underrated Denzel Washington thriller is among the movies on TV tonight
Gardaí will be out in force pulling for speed this week
You may also like
1 week ago
The JOE Friday Pub Quiz: Week 264
1 month ago
Manchester City's Benjamin Mendy charged with four counts of rape
2 months ago
Michael Ballack’s son Emilio, 18, dies in 'quad-bike crash’
2 months ago
Five football documentaries to watch to kill time before the new Premier League season
4 months ago
Christian Eriksen stable but may not play football again, says sport cardiologist
5 months ago
Ryan Giggs charged with assaulting two women and controlling or coercive behaviour
Next Page