Pic: The European team's Ryder Cup suits are a bit on the dodgy side

The Ryder Cup gets underway on Friday and all of us here JOE are getting behind Team Europe in a massive way.

END_OF_DOCUMENT_TOKEN_TO_BE_REPLACED

Paul McGinley's team are at Gleneagles now to get some practice in ahead of Friday morning's Fourballs and the most striking thing we've noticed so far is the attire that the European team is wearing.

We have a feeling that Ian Poulter did some sort of deal with the shop where he buy his table cloths because we cannot think of any other explanation for these woeful jackets... 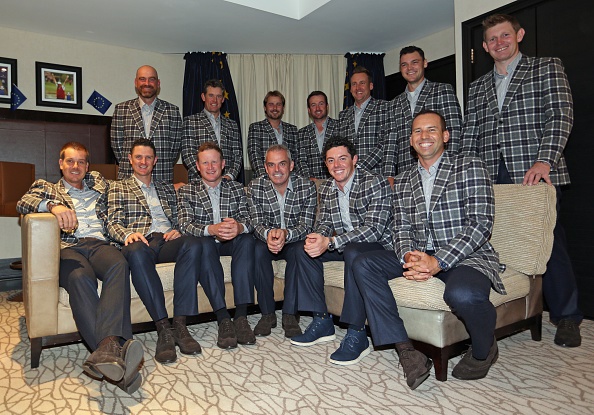 The Big Reviewski || JOE · The Big Reviewski with Andy Serkis, Squid Game follow-ups & the return of Succession
popular
The JOE Friday Pub Quiz: Week 265
Ryanair is seeking applicants for "the worst job in Ireland"
Here's the line-up for this week's episode of The Late Late Show
National Lottery reveals 28 locations where tickets worth over €35,000 each were sold
Taoiseach believes people will "be patient" if planned lifting of restrictions doesn't go ahead next week
People born in April are officially the sexiest, study finds
The 50 most iconic songs of all time* have been revealed
You may also like
1 month ago
Golf's version of Drive to Survive is reportedly coming to Netflix in the very near future
7 months ago
Fine Gael senator says golf and sea-swimming restrictions should be lifted
2 years ago
"Very chaotic" - Irishman describes being struck by lightning on US golf course
2 years ago
Irishman hospitalised after lightning strike on US golf course
2 years ago
Shane Lowry given a hero's welcome in his hometown of Clara, Co. Offaly
2 years ago
Gardaí release plan for Shane Lowry homecoming in Offaly this evening
Next Page