Pic: The eye cut that has seen the David Haye and Tyson Fury fight cancelled

The heavyweight clash between David Haye and Tyson Fury has been cancelled after Haye suffered a serious eye cut in training.

The pair were due to meet next Saturday but it has now been postponed after Haye suffered the injury during his last sparring outing before the bout.

“Mentally, I'm on the floor at the moment. I'm devastated most of all for my loyal fans, my family and my team, as well as Tyson Fury and his team,” Haye said in his statement.

“To everyone who has bought tickets, booked hotels, and followed this fight since it was announced, there is absolutely nothing I can do except apologise from the very bottom of my heart.”

This is the worst tweet I've ever had send. I'm so sorry everyone http://t.co/B2FihU8mn5

Here is the cut that has ruled Haye out of action. 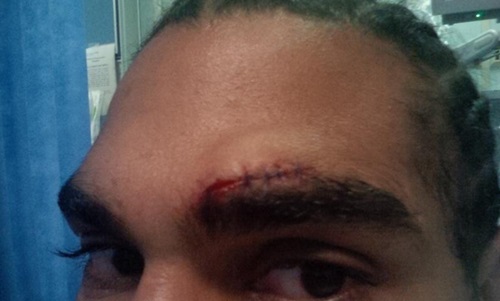 There has been no announcement of new date and Haye is currently waiting on further medical assessment to determine when he can return to action.

popular
Budget 2023: Cigarettes going up, energy credits announced, child and social welfare increases confirmed
Two new 24-hour bus services are coming to Dublin
CONFIRMED: Renters to benefit from €500 tax credit as part of Budget 2023
An underseen disaster film is among the movies on TV tonight
Female child and woman in critical condition after incident in Clare
An action horror classic is among the movies on TV tonight
Jeffrey Dahmer’s dad thinks he knows what’s to blame for son becoming a serial killer
You may also like
5 months ago
Man punched by Mike Tyson on plane explains his side of the story
5 months ago
Mike Tyson breaks silence after punching passenger on flight
5 months ago
Mike Tyson filmed repeatedly punching passenger on airplane
1 year ago
Round up of the best tweets as Irish people all over the world celebrate Kellie Harrington's Olympic win
1 year ago
Brawl erupts between Floyd Mayweather and Jake Paul at press conference
1 year ago
Kate Abdo steals the show at Garcia-Campbell with bizarre compliment
Next Page