PIC: This safe-sex themed Jon Walters Irish flag is already shaping up to be the best flag at Euro 2016

We’ve seen some brilliant flags that Irish fans have brought to matches at home and abroad in recent years.

The ‘Merkel thinks we’re at work’ flag for Euro 2012 was recognised far beyond these shores, while the ‘All Night Long’ Shane Long/Lionel Richie inspired effort also earned plenty of deserved kudos.

A picture of another tricolour was sent into us by JOE reader James Bridges Carley this evening and, combining the legendary Jon Walters with a slogan for safe sex that’s been promoted in these parts of late, it really does have it all. 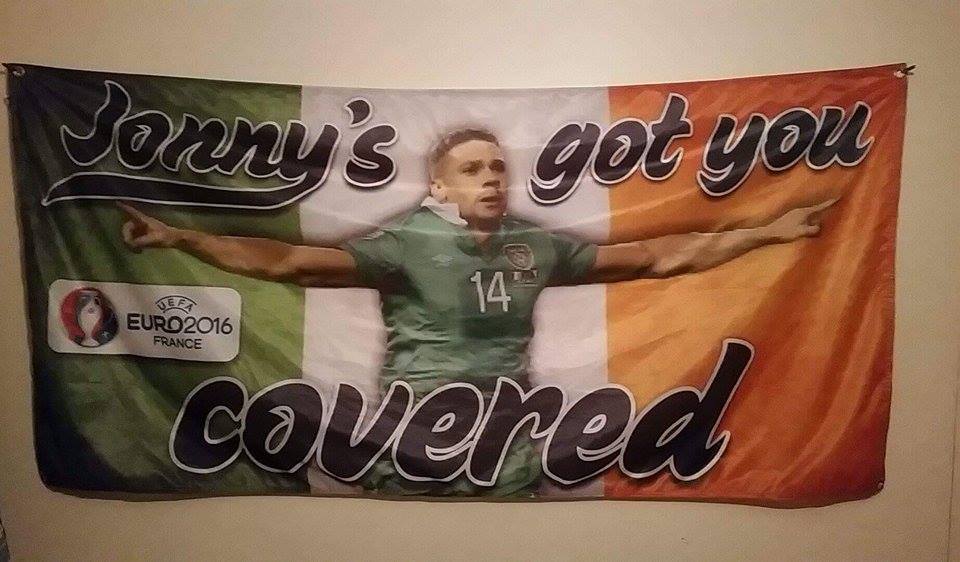 END_OF_DOCUMENT_TOKEN_TO_BE_REPLACED

James told JOE that he plans on heading to France in the summer but, like many Irish fans, is anxiously waiting on news of tickets at the moment.

Surely, with a flag like this, he HAS to make the trip, right?

Cheers to James Bridges Carley for sending this our way. If you have something you would like to share with us, send it to our WhatsApp number 087-4001102, editorial@JOE.ie or hit us up on Facebook or Twitter.

popular
Woman killed in Clare crash named as Peggy Twomey, mother of Marty Morrissey
Schools and third level institutions to remain closed in counties affected by orange or red weather warnings
These are the most generous counties in Ireland, according to GoFundMe
Dart+ West reaches "crucial milestone" on road to transforming Dublin rail network
Amazon Prime Video has quietly added 8 big new movies to its library
Woman in her 90s dies following road crash in Clare
A fun action flick with Nicolas Cage is among the movies on TV tonight
You may also like
1 month ago
The JOE Friday Pub Quiz: Week 264
3 months ago
Manchester City's Benjamin Mendy charged with four counts of rape
4 months ago
Michael Ballack’s son Emilio, 18, dies in 'quad-bike crash’
4 months ago
Five football documentaries to watch to kill time before the new Premier League season
5 months ago
Christian Eriksen shares first update from hospital as he undergoes tests after cardiac arrest
5 months ago
Christian Eriksen stable but may not play football again, says sport cardiologist
Next Page