Pic: This was David Beckham’s contract when he went on loan to Preston in 1995

He earned a little less back in those days. Actually, he earned a lot less.

We couldn’t even imagine the amount of money that David Beckham pulls in on a weekly basis these days, but there was a time when he was slumming it in the lower leagues of English football and earning a wage to reflect it.

Manchester United take on Preston North End at Deepdale in the FA Cup this evening and the fixture has prompted plenty of tales about Beckham’s loan spell at the club way back in the 1994/95 season.

Preston’s stadium manager Paul Bradley is reminded of Beckham’s time at the club on a regular basis because he has a copy of his loan contract from Manchester United on the wall of his office at Deepdale. 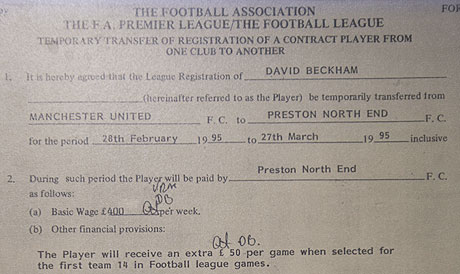 END_OF_DOCUMENT_TOKEN_TO_BE_REPLACED

“David Beckham played down here on loan and I have his contract on my office wall,” Bradley told The Telegraph.

END_OF_DOCUMENT_TOKEN_TO_BE_REPLACED

“I was told to get rid of it by a former chairman, but I was sensible enough to keep it.”

The contract is pretty meagre compared to what footballers earn these days and we reckon it was probably a world away from what some of Beckham’s Manchester United teammates were earning at the time.

Still, £400 a week with a £50 match bonus doesn’t seem all that bad to us, even if it probably wouldn’t be worth his while stopping to pick it up if he dropped that sum on the street these days.