How much do you like L.A. Galaxy and Steven Gerrard? 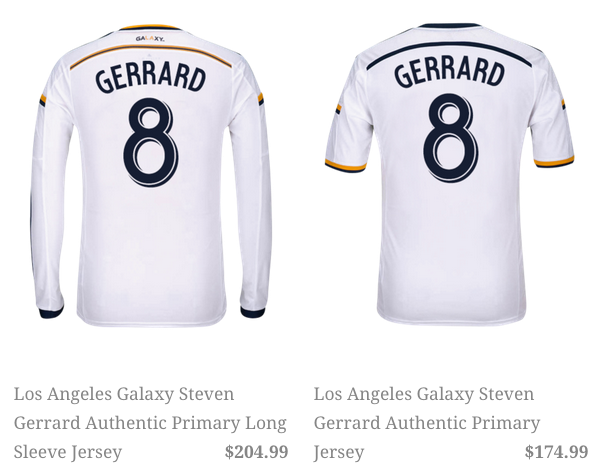 END_OF_DOCUMENT_TOKEN_TO_BE_REPLACED

So, how does L.A. Galaxy justify that whopping price tag?

Well, here’s what they had to say on the shop site: “The details of jersey symbolize the energy and nonstop motion of LA, while the eleven individual stripes symbolize the Starting XI players and completes the traditional sash.

END_OF_DOCUMENT_TOKEN_TO_BE_REPLACED

“The new kit’s neck tape displays the traditional LA quasar, also featured in the lenticular crest. ‘This Is LA’, a fan-inspired team slogan, appears on the jock tag.”

With that many big words, it MUST be worth all that cash. That’s how it works, right?

Via The Independent. Pics via teamlastore.com.

popular
Eurovision producers reveal "irregular voting patterns" during Saturday night's final
One of Liam Neeson's best ever performances is among the movies on TV tonight
QUIZ: Try out one of our trickiest General Knowledge Quizzes yet
One of the longest lunar eclipses of the decade will be visible in Ireland tonight
Where will 2023's Eurovision be held if Ukraine can't host?
QUIZ: True glory awaits if you can 100% this General Knowledge Quiz
REVIEW: Van Gogh Dublin is a truly unique cultural experience
You may also like
4 days ago
Wagatha Christie trial: Rebekah Vardy denies leaking Riyad Mahrez message
1 month ago
Roman Abramovich 'suffered suspected poisoning' following Russia-Ukraine peace talks
7 months ago
The JOE Friday Pub Quiz: Week 264
8 months ago
Manchester City's Benjamin Mendy charged with four counts of rape
9 months ago
Michael Ballack’s son Emilio, 18, dies in 'quad-bike crash’
9 months ago
Five football documentaries to watch to kill time before the new Premier League season
Next Page