Pics: Colombia star James Rodriguez was at Biffy Clyro and hanging out with the Kearney brothers last night (sort of)

Not only was the Colombian star putting Uruguay to the sword last night, he was also enjoying a gig and meeting two Irish rugby stars, all through the magic of cardboard.

Every World Cup needs a breakout star and while Colombia's James Rodriguez wasn't exactly a total unknown before Brazil, he is certainly a global star now. With a goal a game in the group stages, the Monaco man upped it last night by rattling in both goals in Colombia's 2-0 win over Uruguay in the second round, the first of which may well be the goal of the tournament.

One Waterford man, David Walsh, was already a big Rodriguez fan before last night, so big a fan in fcat that he brought a lifesize cardboard cut out of the Colombian to the Biffy Clyro gig in Dublin last night. 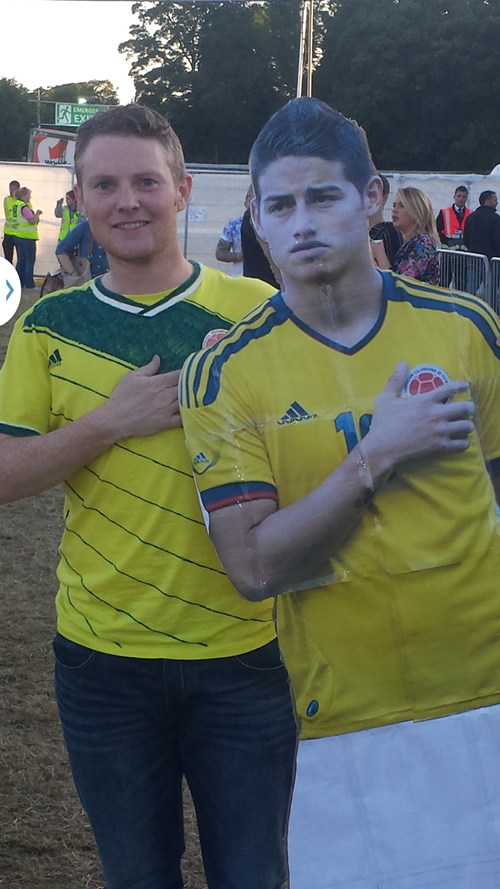 As you might imagine, the cutout was popular with many of the gig goers...

And we know Rodriguez survived the crowd surfing as he was later snapped with the Kearney brothers, Rob and Dave.

We're eagerly waiting to see where else Rodriguez will pop when his team play Brazil on Friday night.

The Big Reviewski || JOE · TBR Spotlight: Loki - Episode Six - 'For All Time. Always.'
popular
Dublin pub hit with 'about 50 or 60' fake bookings on first day of indoor service
Only Murders in the Building is a must-watch for fans of true crime podcasts
PICS: The man with the biggest penis in the world has one unbelievable problem with it
The 50 most iconic songs of all time* have been revealed
People think they've figured out the ranking of the viewers on your Instagram Stories
Pro Evolution Soccer has been killed off after 26 years
QUIZ: Ignite your brain cells with this testing general knowledge quiz
You may also like
1 month ago
Christian Eriksen stable but may not play football again, says sport cardiologist
3 months ago
Ryan Giggs charged with assaulting two women and controlling or coercive behaviour
3 months ago
Martin Compston reveals moment he delayed Line of Duty filming to watch Scotland penalty shoot-out
4 months ago
EA Sports bans Irish FIFA player who racially abused Ian Wright for life
5 months ago
TOWIE star Mark Wright is officially the worst player on FIFA 21
5 months ago
Jamie Carragher reacts to hilarious TikTok remix combining on-air yelp with John Legend song
Next Page