Pics: The Australian squad meet the young Cavan locals ahead of first Test

The Australian International Rules squad have arrived in Cavan ahead of their first game on Saturday night in Breffni Park and have quickly got involved with the local community.

The Aussies geared up for the contest with Ireland with a victory in a warm-up game last night but are now focusing their attentions on the all-important first game this weekend.

Before that however, the travelling party were keen to get out and about in their new surroundings and their school visits seemed to do the trick. 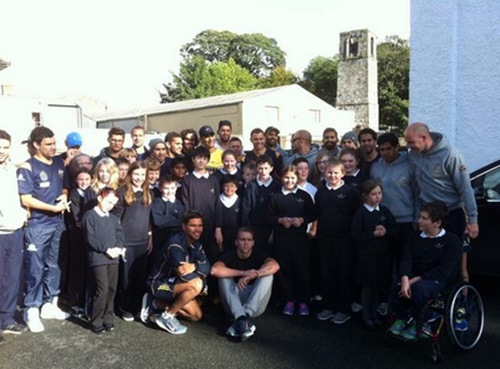 We’re not sure if the term ‘mobbed’ is a slight exaggeration, but good to see the tourists mingling with many of the supporters who will be at Breffni Park on Saturday night.

Cavan Town has put a lot of effort in with a whole host of activities arranged for the weekend to coincide with the match, which hasn't gone unnoticed by one of the finest Irish players to ever grace the AFL and the current assistant coach of  the Indigenous All Stars

Let’s hope the action on the pitch matches the activities off it this weekend.

Advertisement
House of Rugby Ireland · Quinn Roux on finding a home in Ireland and Mike McCarthy brings the absolute HEAT!
popular
Man arrested and charged for breaching Covid regulations in Kildare
QUIZ: Name all the countries of the EU that contain 2 vowels or less
Status Yellow rainfall warning issued for 11 counties
The 50 most iconic songs of all time* have been revealed
QUIZ: Can you name all the teams in the NBA from their locations?
INTO calls on government to reconsider plans to partially open schools
Joe Biden inauguration rehearsal paused as Capitol building goes into lockdown
You may also like
3 months ago
Post-match celebrations and a lack of social distancing at certain events put club game on hold
3 months ago
Cork GAA pleads with clubs and supporters “not to engage in celebrations that breach current guidelines”
7 months ago
What's the Bronco test and why it may come up in conversation this week
9 months ago
The Andy Moran GAA Isolation Workout
9 months ago
SuperValu, Centra and the GAA team up on initiative to support elderly people
10 months ago
Meath GAA club confirm adult player has tested positive for coronavirus
Next Page