Pics: There was an anti-Sky banner on show at the Leinster Under 21 football final tonight

Dublin played Meath in O'Moore Park tonight, and a small banner against the GAA's deal with Sky was in the stands.

The first of many? Perhaps, as the first inter-county game to be played since the announcement of Sky's snaffling of some Championship games also saw the first signs of protest from GAA fans.

A small banner reading 'No 2 SKY' was pictured in the stands at O'Moore Park. 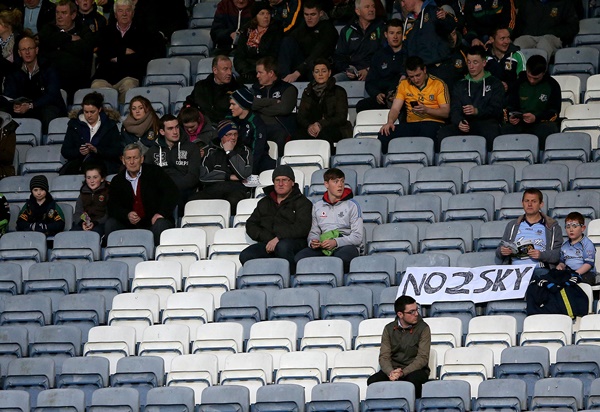 END_OF_DOCUMENT_TOKEN_TO_BE_REPLACED

Today's edition of Liveline featured a man who said he planned to protest at the first game of the Sky deal, a Leinster hurling match between Kilkenny and Ofally at Nowlan Park in June. If tonight's sign is anything to go by, he won't be alone.

popular
Welder awarded €15,000 for unfair dismissal despite admitting to drinking alcohol before work
Netflix has just quietly added 30 big movies to its library
One woman dead and four injured after separate crashes in Clare and Mayo
10 years ago today, the scariest movie ever made (according to science) was released
Man arrested following fatal assault at Kerry funeral
Netflix reveals full line-up of new shows and movies arriving in October
Amazon Prime Video has just added 37 big movies to its library
You may also like
1 day ago
Fifth male juvenile arrested in connection with ramming of Garda vehicle in Cherry Orchard
3 days ago
Four male juveniles arrested in connection with ramming of Garda vehicle in Dublin
6 days ago
Two arrested over accommodation fraud scheme in south Dublin
1 week ago
Man armed with knife arrested after making threats to shop staff in Dublin
1 week ago
National Transport Authority apologises to passengers for "poor reduction in service performance"
1 week ago
Two new 24-hour bus services are coming to Dublin
Next Page