PICS: Unseen images of Aidan O'Shea clashing with a Dublin player on the pitch after their tunnel row

There was bad blood before the throw-in.

Prior to the start of the All-Ireland final, there was some confusion as Dublin and Mayo players ran onto the Croke Park together at the same time.

As you can see below, The Dubs were supposed to be the first team out on the pitch at 2.56pm, according to the timetable that Croke Park officials adhere to. Jim Gavin's men didn't step foot on the pitch until 3.02pm though and they may be fined for this. 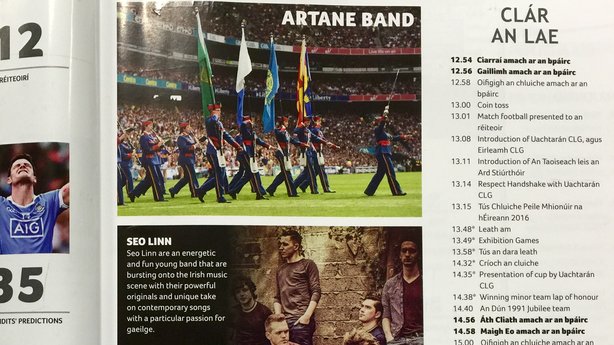 END_OF_DOCUMENT_TOKEN_TO_BE_REPLACED

While the scenes of both players clashing weren't as tumultuous as the famous 'Mill on the Hill' of 2006, John Casey of Midwest Radio said that things got very heated in the tunnel between both sets of players.

"Aidan O'Shea and Kevin McManamon were swinging at each other going across the pitch, there was elbows flying and a fracas in the tunnel, players going for each other. Anyone not in the stands missed a great start" Casey said.

Here's the images of Aidan O'Shea clashing with a Dubs player (we think it's Denis Bastick) that the cameras didn't dwell on.

The GAA have confirmed that they are investigating the incident.

popular
The JOE Movie Quiz: Week 166
QUIZ: Test your skills to the limit with this General Knowledge Quiz
Family of Ashling Murphy share heartbreaking tribute at Fleadh Cheoil
QUIZ: Can you score 12/15 in this difficult General Knowledge Quiz?
The JOE Friday Pub Quiz: Week 306
One of the best Irish films of recent years is among the movies on TV tonight
Man in his mid-20s dies in two vehicle collision in Cork
You may also like
10 hours ago
Man arrested following discovery of a body in apartment in Dublin
12 hours ago
Motorcyclist in his early 20s dies following two-vehicle collision in Dublin
1 day ago
Lewis Capaldi and Niall Horan busk together on the streets of Dublin
3 days ago
Man arrested in Dublin over suspected people smuggling operation
3 days ago
NTA pumps the brakes on late night Luas service
4 days ago
Nine weather stations in Ireland had their hottest day ever recorded in July
Next Page