In the true Christmas spirit, fans of the San Francisco 49ers are spreading festive cheer via the medium of trolling

We all know the value of crowdfunding campaigns, which can be used to drive charitable causes, get a worthy product off the ground with a little bit of financial backing, or in this case, troll an opposing team.

Taking a page out of Paddy Power's book, these fans in San Francisco have decided that they wanted to troll divisional rivals (who are currently top of that division) the Seattle Seahwaks by buying a billboard space in Seattle, and leaving a little message for them about just how many Super Bowls the 49ers have compared to them. 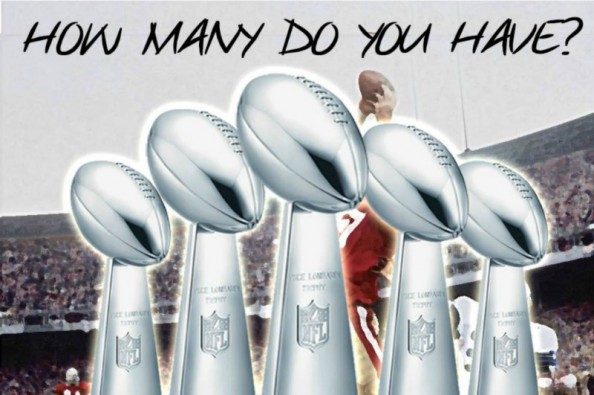 END_OF_DOCUMENT_TOKEN_TO_BE_REPLACED

While their GoFundMe campaign makes it clear that this might not be the exact poster that goes up, it does give a pretty good idea of the type of thing they're looking to do. This all comes as a response to the fact that Seattle landed the first innovative blow by having a plane fly over Candlestick Park in San Fran during the last game between the two sides, pulling a banner behind it which said "Go Hawks".

The 49ers fans have already reached their goal of $7,000 and surpassed that, but Aasheesh Shravah who set up the campaign has encouraged people to keep donating, as the rest of the money will all go to charity. It's nice to see some good-natured trolling with a soul, given the time of year that's in it.

popular
Gardaí unveil new Armed Support Unit vehicles to replace older models
Netflix has just added 33 very big movies to its library
The full list of cancelled flights in and out of Dublin Airport on Monday (so far)
Fish and chips could be removed from Irish menus over rising fuel costs
One of the greatest crime movies of all time could be getting a sequel
The 50 most iconic songs of all time* have been revealed
The long-awaited MetroLink is finally happening, for real this time, honest
You may also like
7 years ago
Video: Galway lad lands slick trampoline trick shot using an American football
7 years ago
Pic: A very funny mistake in this US newspaper headline should give you a laugh
7 years ago
Video: Irish people watch lacrosse for the first time and explain why it’s nothing like hurling
7 years ago
Pic: WWE’s Triple H plans to eat this mountain of food over 3 days
7 years ago
Video: College footballer performs 40-inch box jump while holding two 32kg dumbbells
7 years ago
Video: The latest People Are Awesome compilation features some unbelievably talented kids
Next Page