All of these players made a huge contribution to the green jersey...

It's been a good week for fans of hullabaloo, indignation and uproar after Gordon McQueen's ill-advised remarks about the decision of James McCarthy and Aiden McGeady to play international football for Ireland.

If that wasn't enough, then Sky Sports unintentionally fanned the flames with this infographic that annoyed quite a few people. With this in mind, we've decided to select an XI of the best Irish players that were born and raised outside of the 32 counties.

END_OF_DOCUMENT_TOKEN_TO_BE_REPLACED

Yes, the likes of Paul McGrath and David O'Leary were born in England, but their formative years were spent in Ireland hence their exclusion here. Regardless of where these players were born one thing is certain, they all represented the green jersey with pride, distinction and skill during their time with Ireland.

As is always the case with selections like these, not everyone will agree and you're more than welcome to add your own suggestions at the bottom of the page, but FC Plastic Fantastic will adopt a 4-4-2 formation and line out as follows...

The Birmingham born shot-stopper is probably better known as Packie Bonner's understudy during Euro '88 and Italia '90, but even Manuel Neuer would probably be understudy to the Donegal man during that era, right? Right?

END_OF_DOCUMENT_TOKEN_TO_BE_REPLACED

Peyton earned 33 caps in a career that ran from the '70s right up to the '90s, which is an impressive return for the former Fulham, Everton and West Ham 'keeper.

Since retiring, he had a stint as goalkeeper coach at Arsenal along with spells coaching in Sweden and Japan. 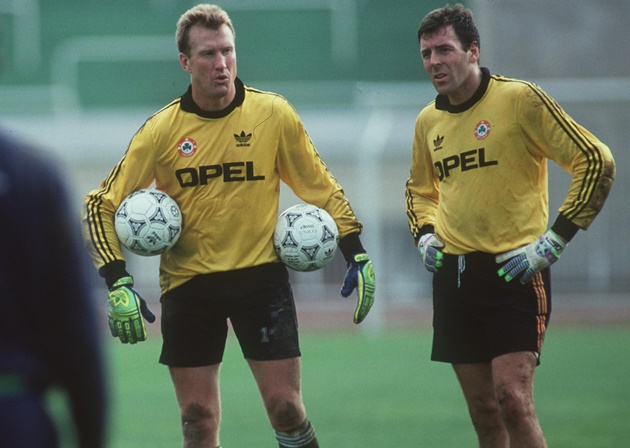 END_OF_DOCUMENT_TOKEN_TO_BE_REPLACED

The versatile London born defender was one of the most solid full-backs to ever wear the green jersey and his club career was also stellar. He played more than 400 games for Tottenham and played an integral part in their 1984 UEFA Cup win over Anderlecht.

The classy defender won 53 caps for Ireland between 1979 and 1991 and played in every game at Euro '88, including a stellar performance against England. He is probably best remembered for a goal he scored against Spain during qualifying for the 1990 World Cup, the only goal in a famous 1-0 win. Hughton later returned to the Irish set-up as Brian Kerr's assistant during his tenure. 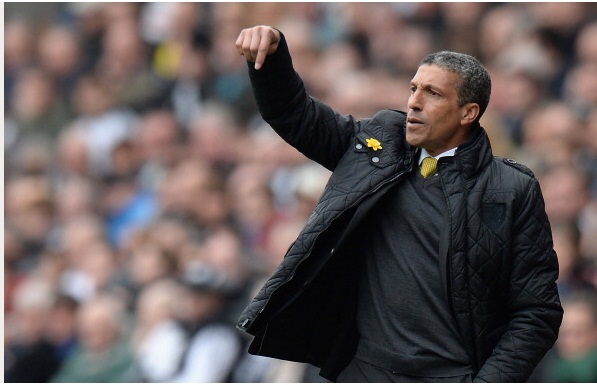 Before his successful managerial career and those Penney's ads, McCarthy had etched his name into Irish football history as an extremely classy defender.

Born in Barnsley, Yorkshire, McCarthy captained Ireland at the 1990 World Cup and was exceptional in that tournament. He also guided us to the rather eventful 2002 World Cup in Japan and Korea where absolutely nothing of note happened, *cough, cough*.

Despite his very impressive career as a player and manager, this is still the best thing that Mick has ever done as far as we're concerned.

Before he became a pundit that hated puppies, babies and bad defending on Match of the Day, Lawro was as good a centre-half/holding midfielder as there was in his era; five league titles, three league cups, the FA Cup and the European Cup speak for themselves.

Born in Lancashire, Lawrenson won 39 caps for Ireland and you've probably read his name quite a fair bit in the papers this week as he scored the winner in a vital 1-0 Euro qualifier win against Scotland in 1987 in Jack Charlton's first qualification campaign. An achilles injury ruled him out of Euro '88 and he was sorely missed.

Irish supporters love a cult hero and it's impossible to find someone who doesn't adore the dedication and commitment that 'Killer' brought to the green jersey.

111 appearances for Ireland, 66 of them in consecutive games, is a wonderful return for a great servant to Irish football. His love for Ireland was never in doubt even from a young age; while still a youth team player at Preston he was called up to the England u-18 squad but declined as he had always wished to represent Ireland.

He put the ball in the English net and chipped Pagliuca in Giants Stadium. What else has to be said?

Not even the famous 'Tactics Truck' could diminish our love for what the former Ireland captain achieved in the green jersey.

The former Chelsea, Aston Villa and Middlesbrough midfielder played in all five of Ireland's matches at Italia '90 and captained his country during USA '94 despite those highlights in his hair. 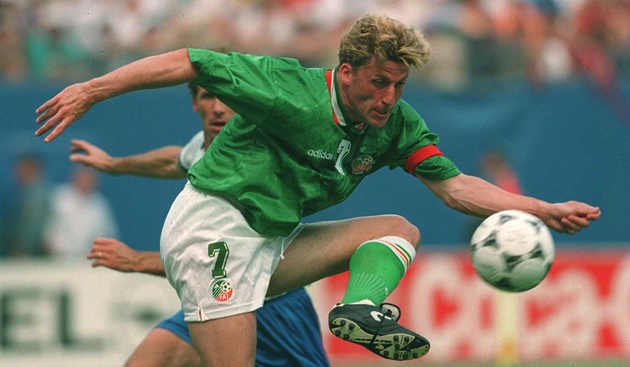 The Everton midfielder gets in our side ahead of the likes of Matt Holland, John Sheridan, Jason McAteer and Kevin Sheedy simply because of his undoubted potential and the importance that he holds in the current team.

We all knew McCarthy was going to be good but his development has been extremely impressive under Roberto Martinez at Wigan and Everton. The 24-year old is assured, composed and intelligent on the ball, all essential ingredients in our midfield if we're to qualify for Euro 2016 and future tournaments. 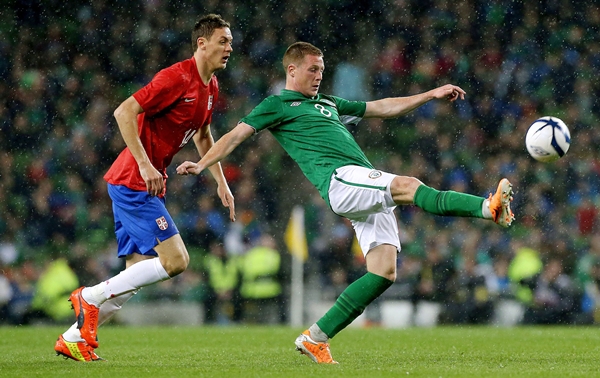 The tricky left winger was an integral part of the Spurs team that won consecutive FA Cups in the early '80s and their UEFA Cup win in 1984.

He also featured in all of Ireland's matches at Euro '88, where our abiding memory of him is when he was almost decapitated after going through one on one with the 'keeper against the USSR. 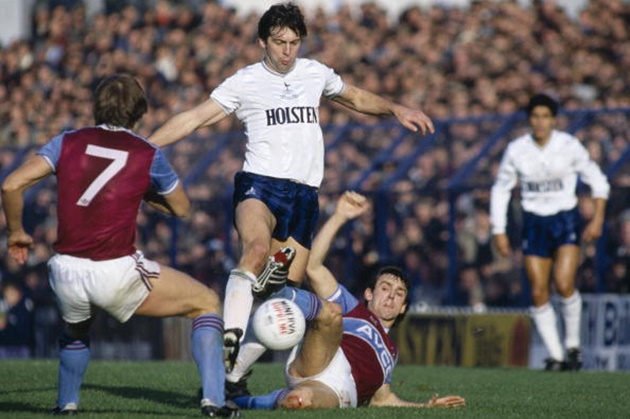 When you think of the best moments under the Jack Charlton era, then the image of John Aldridge is rarely far from your mind despite a long wait to open his international account. Aldo's amazing predatory instincts and penalty box poacher's instincts were curbed to fit in with Jack's game-plan but he still performed a hell of a lot of work up front for Ireland while scoring some vital goals.

The famous brace away to Malta, hat-tricks against Turkey and Latvia and that famous match against Mexico in Florida. It shouldn't be overlooked that his goal in this game was vital as it sent us into the last 16 at USA '94.

19 goals in 69 matches is a very impressive haul for Ireland’s most famous footballing Liverpudlian.

We all know the controversy that surrounded his eligibility but that shouldn't take away from the effort, bravery and goals that Big Cas' contributed to the Irish cause during his career.

For a brief time he was our record caps holder and his aerial skills were vital to how Jack Charlton set his teams up to play. 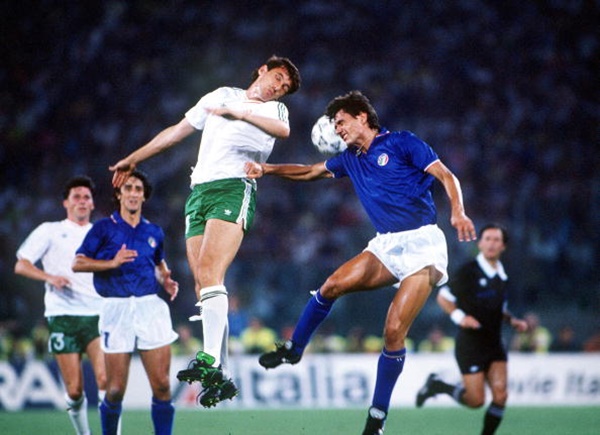 popular
Micheál Martin confirms he intends to return as Taoiseach
QUIZ: Step on up and conquer this tricky General Knowledge Quiz
The JOE Friday Pub Quiz: Week 314
QUIZ: Can you name the Irish county towns from just their vowels?
An Oscar-winning war thriller is among the movies on TV tonight
An incredible Western crime drama is among the movies on TV tonight
Johnny Depp/Amber Heard trial movie unveils first trailer and it's not good
You may also like
1 month ago
The JOE Friday Pub Quiz: Week 306
1 month ago
Rebekah Vardy breaks down in tears in first TV interview since Wagatha Christie defeat
3 months ago
Gary Lineker says he suffered racist abuse during football days due to "darkish skin"
4 months ago
Merseyside police defend ‘exemplary’ Liverpool fans tear gassed by French police
4 months ago
BBC trainee accidentally posts message mocking Man United live on TV
4 months ago
Kurt Zouma charged with three animal welfare offences
Next Page