Power ranking the best adidas football boots of all time

So many classics to choose from.

A tribute to one of the most beloved Adidas boots, the Copa Mundial, with its own modern twist, the Copa SL is a very lovely boot indeed and comfortably sits alongside some of the best the brand with the three stripes have released in the last 70 years or so.

END_OF_DOCUMENT_TOKEN_TO_BE_REPLACED

Attempting to come up with some sort of ranking of all of the adidas classics is a thankless, arduous task that will attract nothing but grief and abuse, which is exactly why we’ve decided to give it a whirl.

When reading through the list below, try and be gentle and remember that the selections are purely a matter of personal taste; if you absolutely must vent your anger, you’ll find us hiding behind the couch. 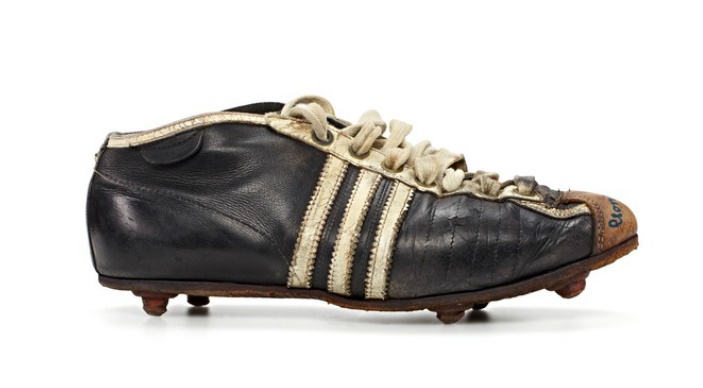 Germany’s victory in the 1954 World Cup Final owed, according to plenty of accounts, quite a bit to the revolutionary football boots made by Adi Dassler which enabled players to change their studs depending on the conditions.

Testimonies from that era would lead you to think that boots resembled modern work footwear with an outer layer so tough that they could break a shin, but these boots have aged pretty well and still look alright over 60 years on. 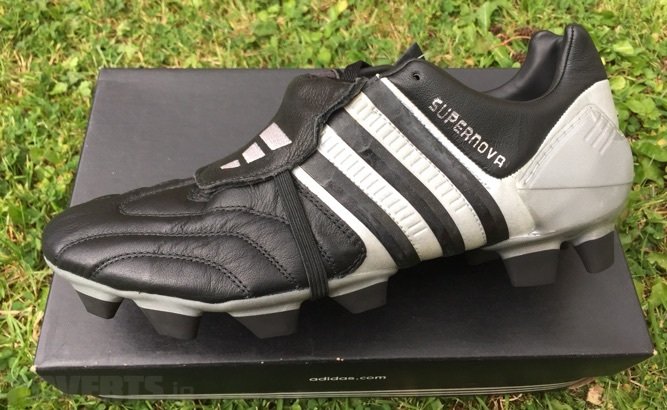 With a design very similar to the Predator Mania, the Supernova was an unappreciated boot that disappeared off the radar completely not long after its release in the early 2000s.

With Patrick Vieira as the poster boy, the boot was targeted at the anti-fancy dan, the no-nonsense player who got the job done and had no time for faffing about.

The straightforward grey and black model suited that brief perfectly, the tawdry gold and black edition, less so. 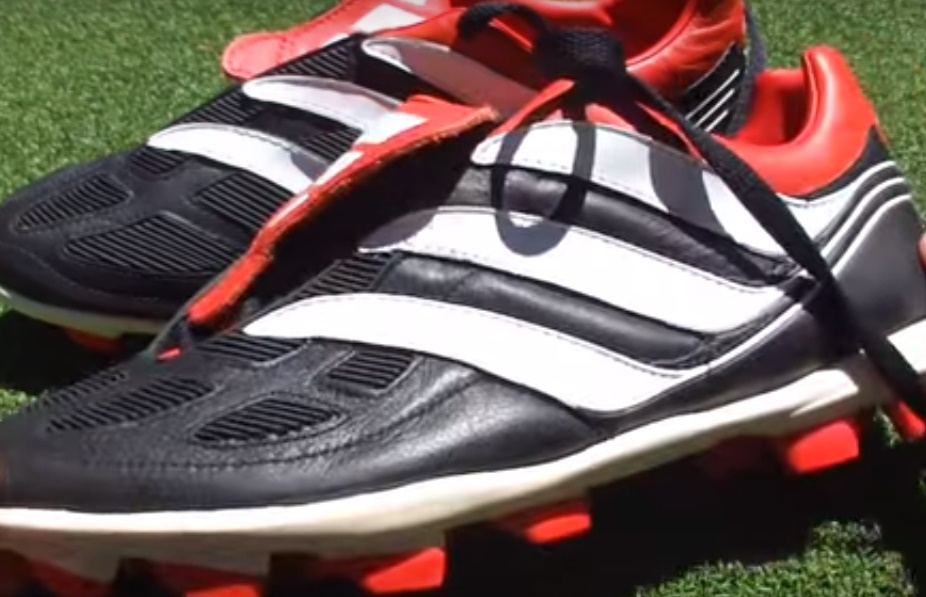 It is this author’s opinion that the heyday for the adidas Predator lasted from approximately 1998-2004 and the version released for Euro 2000 is a testament to that theory.

The firm ground edition of the Precision boot introduced the white sole and red blade concept that reached its gloriously sexy peak with the Mania boot a couple of years later.

No more than the Euro 2000 tournament itself, this was a boot that just hit the spot. 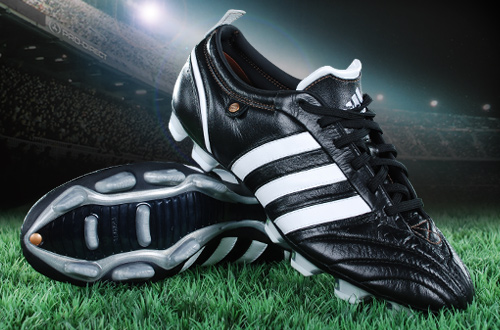 Plenty of adidas boots (including the Copa SL that has just been released) have been held up as the modern successor to the World Cup and Copa Mundial, but the first ever version of the adiPure is probably the closest adidas have come to it.

The vast majority of the adiPure range are fine boots that each have their individual merits, but the classic design of the original adiPure remains (for me, Clive) the most attractive of all.

Think of Xabi Alonso in his late-twenties peak, dictating affairs from the middle of the park with these babies on his feet; a very pleasant image indeed. 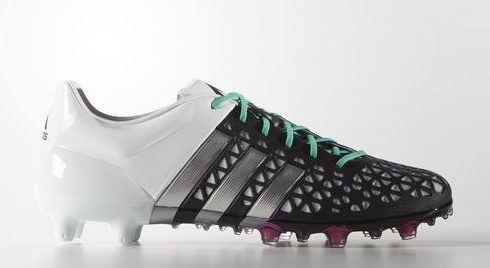 The decision to bring an end to the Predator range was met with uproar from boot fans, and adidas had a duty to ensure that their replacements cut the mustard.

The lime green and black colour scheme of the original Ace boot took a while to get accustomed to, but subsequent versions with alternative combinations of colours have worked a treat.

The aesthetic improvements only add to the appeal of a boot that is as comfortable on your foot as a pair of slippers stuffed with marshmallows.

For some football boot lovers, nothing beats a plain pair of black boots with a prominent display of the brand’s logo. Just think for example, of the Umbro Speciali, the Puma King or the Nike Tiempo; lovely boots all.

We’ll come to the greatest plain boot of all a little bit later, but in the 1970s, Franz Beckenbauer wore a collection of simple Adidas designs that were as easy on the eye as his playing style.

No way would this look out of place four decades on. 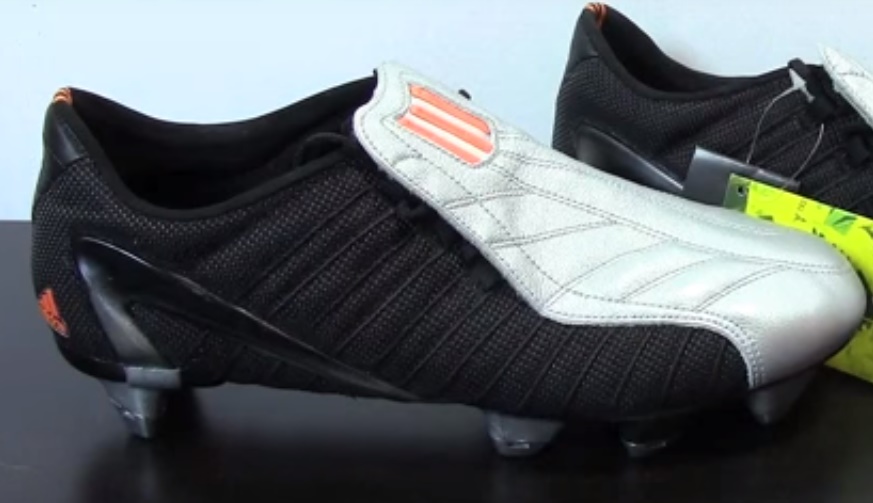 It’s fair to say that the f50 boot suited a certain type of player with a certain taste. As you might have guessed from my selections so far, I wouldn’t necessarily be one of them, but it would be grossly unfair to discount a long-running and very popular range of boot based on that logic.

As is often the case, the original turned out to be the best and the first f50 boot, with a lightweight feel, slick stripe at the back and a range of attractive colour combinations, deservedly got plenty of kudos when worn by some of the world’s best players at Euro 2004. 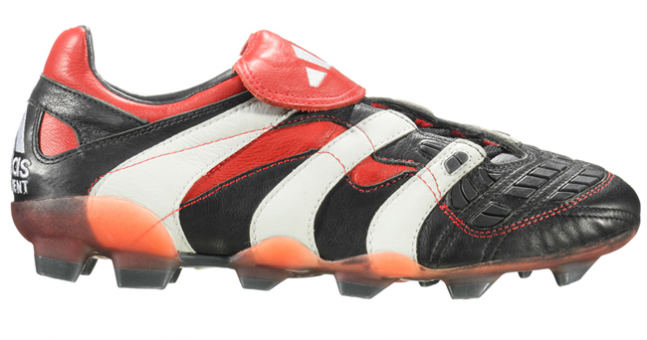 My outstanding memory of the Predator Accelerator is of David Beckham’s foot lightly brushing against the calf of Diego Simeone, causing him to collapse like a house of cards. No doubt the current Atletico Madrid manager will put that down to the incredible power they could supposedly generate.

A lot of Adidas fans would have this boot as their number one and I can’t really blame them.

The grooves on the instep were still very much an outstanding feature of Predator boots at the time, but because of the size of the Adidas logo and the prominent red tongue, they didn’t stand out as much they did on earlier versions.

Not only is the Accelerator one of the coolest boots of all time, it starred in undoubtedly the coolest football boot advert of all time prior to the 1998 World Cup. 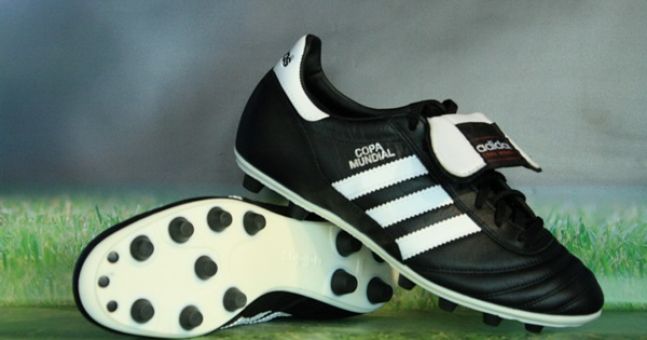 When a football boot is still one of the most sought-after and pricey boot on the market nearly 40 years after it was originally released, you know it must be something special.

And the World Cup and its moulded-stud equivalent, the Copa Mundial, is something special.

From a performance point of view, the World Cup is extremely comfortable and thanks to the kangaroo leather, it’s ultra-durable too. If you don’t get a good year or even more out of a pair of them then you’re very unlucky.

Aesthetically, even though there’s nothing particularly special about the boot, the white tongue (which often causes all manner of difficulty for players wearing it) had made it stand out for years and the best thing is, especially with the Mundial, it gets better with age when a more worn look takes hold. 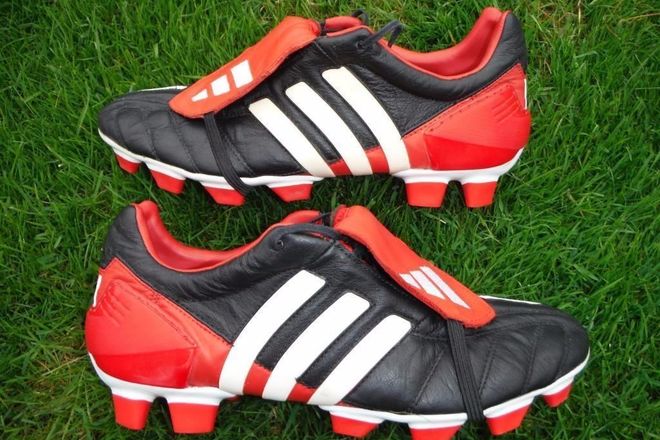 They released plenty of editions afterwards, many of which were impressive in their own right, but there’s an argument to be made that adidas should have discontinued the Predator range after the Mania because they were never going to top this.

Functionally, it was as good as you’d expect from a Predator, but the vast majority of its legions of fans would freely admit that when it comes to the Mania, it’s all about style over substance.

The soft ground version of the boot was nice, but fans went wild for the firm ground version, with the white sole and red moulded blades, which perfectly complemented the elasticated tongue and the subtle white grooves at the top corner of the instep.

The Big Reviewski || JOE · The Big Reviewski with Y: The Last Man, that Malignant ending & a secret streaming service
popular
The 50 most iconic songs of all time* have been revealed
"One person's rent is another person's income" – Varadkar rejects calls for three-year rent freeze
PICS: The man with the biggest penis in the world has one unbelievable problem with it
You could be shopping in an Aldi store with no checkouts in Ireland in the near future
Government announces special €1,860 payment for laid-off workers during pandemic
QUIZ: Can you 100% this tricky Oasis quiz in just three minutes?
The film that predicted the pandemic is among the movies on TV tonight
You may also like
3 weeks ago
Manchester City's Benjamin Mendy charged with four counts of rape
1 month ago
Michael Ballack’s son Emilio, 18, dies in 'quad-bike crash’
1 month ago
Five football documentaries to watch to kill time before the new Premier League season
3 months ago
Christian Eriksen stable but may not play football again, says sport cardiologist
5 months ago
Martin Compston reveals moment he delayed Line of Duty filming to watch Scotland penalty shoot-out
6 months ago
EA Sports bans Irish FIFA player who racially abused Ian Wright for life
Next Page