QUIZ: Can you remember the starting XI from THAT game against France?

Nine years, and we're still not over it. Not even nearly.

The year was 2009. The Republic of Ireland were in a World Cup play-off against France. We had got out of Croke Park with a 1-0 loss and though it was  asking a lot of us to qualify, the tie was still very much alive.

We had the dream start in Paris. We scored a beautifully-worked goal. A goal as good as any goal we've scored since. 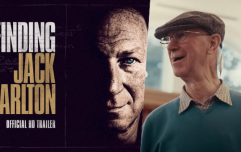 END_OF_DOCUMENT_TOKEN_TO_BE_REPLACED

We played well. We brought the game to extra-time. We were headed towards penalties, with all the momentum in the world. Beating the French in their own backyard. We're not saying that we were definitely going to win but... we were.

And then one of the biggest travesties in the history of sport took place. Thierry Henry controlled the ball with his hand, TWICE, flicked it back to William Gallas, and he won the game for France.

It was a horrible night. The image of a distraught Shay Given pleading with the referee, the iconic picture of a defeated Richard Dunne sat beside the criminal himself. It was all too much to take.

But to quote Eamon Dunphy: "Karma. What goes around comes around, baby."

France were eliminated in the group stages of the tournament, and didn't win a single game.

Now, we're not saying that we were going to win the World Cup if Henry hadn't handled the ball, but... we were.

You remember the heartbreak, no doubt about it, but do you remember our starting XI?

popular
The JOE Friday Pub Quiz: Week 215
QUIZ: Can you guess the drink from its can?
Here's everything coming to Netflix in November
Kanye West presents Kim Kardashian West with hologram of her late father as birthday gift
The JOE Movie Quiz: Week 75
Paschal Donohoe confirms that clothes are not deemed essential
The 50 most iconic songs of all time* have been revealed
You may also like
3 days ago
QUIZ: How well do you remember the football references in Peep Show?
4 days ago
Paul Pogba releases powerful statement in response to 'fake news' from The Sun
2 weeks ago
There is an incredibly easy speed glitch in FIFA 21
2 weeks ago
QUIZ: How well do you know these classic FIFA covers?
1 month ago
Irish international Josh Cullen tests positive for Covid-19
2 months ago
Harry Maguire gives his version of events in Mykonos in TV interview
Next Page