When Joe Cortez confirmed he had joined Conor McGregor's camp, he didn't reveal many details.

The Hall of Fame boxing referee explained in a recent interview that there was 'a lot of stuff' he couldn't talk about because of a confidentiality agreement he had signed with Conor McGregor's team.

Cortez was the man in the middle for McGregor's sparring session against two-time boxing world champion Paulie Malignaggi. Initially, he didn't give away much about the eight rounds in the gym:

END_OF_DOCUMENT_TOKEN_TO_BE_REPLACED

"It was like any other fight. We tried to make it like it was a real fight. Paulie did a great job in making sure he fought the way he wanted to. It was very, very exciting, a lot of fun and it allowed McGregor to learn all the things that could happen in the ring." 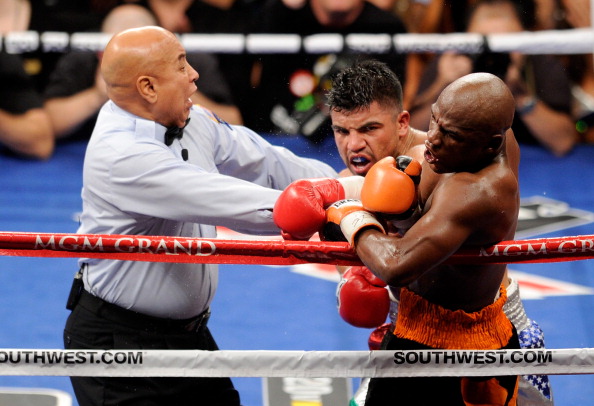 However, Cortez revealed way more details about the fight to Sirius XM. According to the famed pugilism official, he was forced to step in to break up the action when things got 'a little rough'.

“He handled himself pretty good with Paulie. That guy can pop. He was in there mixing it up a little bit with Paulie and it was the real thing.They was no messing around. In fact, I had to stop the action and I had to say, ‘Alright guys, you guys are a little out of control here, you gotta stop this.’ It got a little rough.”

“They were both roughing each other up and I had to stop the action like in a regular fight. They were holding too much, they were trying to punch each other. I mean, it got a little bit out of control where I had to call ‘Time!’

Cortez added that part of the reason for stepping was because of the trash talk battle that ensued between McGregor and Malignaggi:

END_OF_DOCUMENT_TOKEN_TO_BE_REPLACED

“(I said) ‘Alright guys, you gotta stop this right now. I want a good clean round. Give me sportsman-like conduct. Understand? I don’t want to take any points from either one of you. Do you understand??’ I looked at them and they said, ‘Okay, alright.’ And I said, ‘Time in.’”

Sounds pretty damn close to a real boxing bout to us. Why Cortez decided to drop this information now after holding back at the start is anyone's guess.

popular
Katherine Ryan says famous TV star is a ‘predator’ and everyone in industry knows
Staff threatened with screwdrivers during armed pharmacy robbery in Dublin
20 years ago, one of the best sci-fi movies of the 21st century was a box-office bomb
The JOE Friday Pub Quiz: Week 322
The JOE Movie Quiz: Week 181
Man fired for not being "fun" at work wins legal battle, nobody has to be fun now
QUIZ: Can you get 100% in our World Cup shocking upsets quiz?
You may also like
3 weeks ago
Conor McGregor slammed for Halloween photo of mum in 'black face'
3 months ago
Conor McGregor to make film acting debut in Road House remake
2 years ago
Conor McGregor responds to Paschal Donohoe’s calls to encourage social distancing amongst Irish public
3 years ago
"I was in the wrong" - Conor McGregor apologises over incident in Dublin pub
3 years ago
Charges dropped in Conor McGregor phone-smashing case
3 years ago
WATCH: New footage released of Conor McGregor allegedly smashing fan's phone in Miami
Next Page