"Who did this? You've got to remove people like that".

Richie Sadlier has said that whoever leaked information from Stephen Kenny's dressing room should be identified and removed from the camp.

This comes in relation to an incident that saw Kenny show a three-minute motivational montage to players before a game versus England, that featured "historical material". 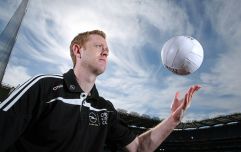 END_OF_DOCUMENT_TOKEN_TO_BE_REPLACED

Speaking on Tuesday night, Sadlier first described the entire situation as a "non-story compared to how it was first reported", and said that there doesn't seem to be any senior members of the staff who have issues with what happened.

He did say that the person responsible knew that leaking this information to the press would result in Kenny being undermined.

"That would be the concern for me. That somebody clearly tried to in some way Stephen Kenny.

"A lot of effort should now be undertaken privately to determine who did it, and make sure their access to the camp is removed."

Sadlier also stressed that he believes that it has not undermined Kenny's authority, but that he does believe that was the individual's intention when it was leaked to the press.

He said that the people who matter haven't come out publicly or privately to complain about what took place.

The video shown to players also featured clips of goals being scored against England in the past.

The Big Reviewski || JOE · TBR Spotlight: The Falcon and the Winter Soldier Episode Five - 'Truth'
popular
The JOE Friday Pub Quiz: Week 239
QUIZ: How well do you remember the very first Game of Thrones episode?
QUIZ: You'll find it hard to name all these towns from their Irish name (part 2)
Stephen Donnelly says he "couldn't care less" about being mentioned by his department on Twitter
Taoiseach Michéal Martin says Ireland could face another lockdown by winter
Aldi to trial loose pasta and rice to reduce plastic waste in the UK
The 50 most iconic songs of all time* have been revealed
You may also like
1 year ago
WATCH: Richie Sadlier opens up about sexual abuse he faced as a young teenager
3 years ago
Richie Sadlier talked a lot of sense about education and consent on The Ray D’Arcy Show
4 years ago
EXCLUSIVE: "Pretending to be grand had stopped working" - Richie Sadlier on how he became a psychotherapist
7 years ago
Video: The RTE panel reaction to Noel King’s post-match interview
7 years ago
Richie Sadlier predicting a great night ahead for Kerry fan in Dublin
7 years ago
Richie Sadlier has a funny dig at RTE’s captioning department
Next Page