Leinster were fortunate to end with 14 men but were deserving winners of the 2018/19 Guinness PRO14 final at Celtic Park.

Tries from Garry Ringrose and Cian Healy, with Johnny Sexton kicking eight points, saw off Glasgow Warriors in front of 47,000 fans in their hometown.

END_OF_DOCUMENT_TOKEN_TO_BE_REPLACED

Leinster missed the chance to take an early lead when Johnny Sexton missed a penalty most of the crowd took for granted as a score. The kick was skewed and, after some fierce pressure, it was Glasgow taking the lead. Matt Fagerson powered over from close range and Adam Hastings added the extras.

The Celtic Park crowd was 4:1 in favour of home to travelling support so Leinster needed to halt any more early momentum. They did just that when they ploughed into Warriors from the restart. Luke McGrath blocked down a clearing kick from Stuart Hogg and Garry Ringrose pounced on the skittling ball.

That Ringrose try that keeps Leinster right in this one. Great block from McGrathpic.twitter.com/pQ0hsKtpam 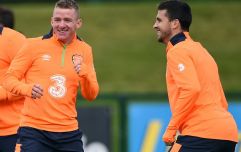 END_OF_DOCUMENT_TOKEN_TO_BE_REPLACED

Glasgow were 7-5 in front when they lost hooker Fraser Brown to a nasty-looking knee injury. After a break in play, they went close to scoring in the corner but Jordan Larmour and Ringrose combined to prevent a try. Warriors did not leave empty-handed, though, as Hastings kicked a penalty from close-range.

As the half wore on, the Leinster forwards stepped up with big plays and almighty pressure. They put together 17 phases in a row and Cian Healy eventually battered over for a try that Sexton converted. The outhalf, getting past his early kicking yips, popped a penalty over after 36 minutes.

The half ended with Larmour creaming van der Merwe over the sideline and getting roared on by a fired-up Sexton. HALF-TIME: Glasgow 10-15 Leinster 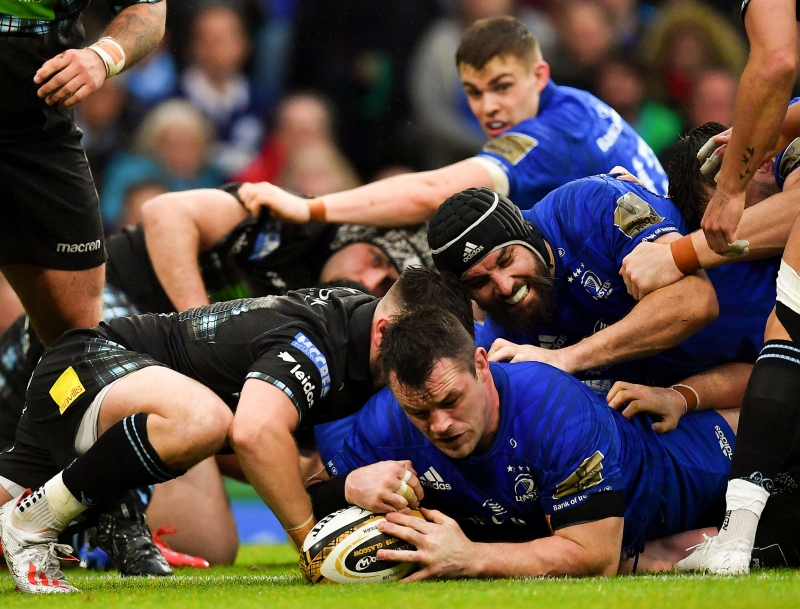 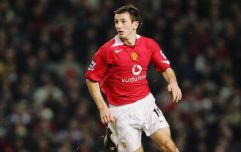 END_OF_DOCUMENT_TOKEN_TO_BE_REPLACED

Leinster put the hammer down in the opening 15 minutes of the second half and Kyle Steyn was yellow-carded for illegally slowing play down after a stunning break from Garry Ringrose and great support from James Lowe.

Warriors survived the attacking maul and resulting phases but were penalised in the process and Sexton made it 18-10. Leinster then should have added to that when they had a penalty, off a scrum, at close range but the holders went for the kill. They ended up leaving empty-handed after incredible defence from Glasgow.

Then came a huge talking point as Rob Kearney clattered into Stuart Hogg, who had just claimed his kick, in mid-air. Few would have argued with a Kearney red card but referee Nigel Owens opted for a yellow after telling the Leinster veteran he had got his 'timing wrong'.

"You're careless, you got your timing wrong and it is a yellow card.

A yellow card for Rob Kearney for a high challenge on Stuart Hogg.

Glasgow, urged on by the home fans, then won a scrum penalty in the Leinster 22 but they lost the collision and were penalised. With 10 minutes to go, Leinster were still two scores clear.

The holders sought to play the clock down with one-out carries but they were penalised by Owens and Grant Stewart raced down the right flank for a try in the corner.

The conversion was missed and Leinster kicked the restart long. Glasgow tried to run it out but there was a knock-on. Leinster got the attacking scrum with 60 seconds to go.

They closed it out to reign supreme again.

OUR MAN OF THE MATCH: Garry Ringrose (Leinster) with Rhys Ruddock a close, close second.

popular
The JOE Friday Pub Quiz: Week 331
New Netflix series deserves to be as big as Stranger Things
QUIZ: JOE's Big News Of The Day Quiz #39
Couple left mortified after best man delivers incredible punchline during speech
BBC apologises after calling Paul Mescal 'British' in Oscar coverage
Forspoken breaks the golden rule of gaming... and not in a good way
Irish names among the top 10 hardest words for British people to pronounce
You may also like
4 years ago
Liam Miller charity match organiser dismisses reports that the GAA have given go-ahead for Páirc Uí Chaoimh
4 years ago
Roy Keane and Paul Scholes among Man Utd legends coming to play in Cork for Liam Miller tribute match
4 years ago
Images of Celtic's new away kit have been leaked and the badge is completely different
4 years ago
WATCH: Soccer Republic's tribute to Liam Miller is absolutely heartbreaking
5 years ago
Celtic are coming to Dublin to play Shamrock Rovers this summer
5 years ago
Irish punter scores a massive, winning accumulator by spelling out 'C-E-L-T-I-C'
Next Page