A Down schoolboy was left stunned when, after writing to Belgium manager Roberto Martinez, he received a reply from his hero.

Ten-year-old Charlie McCarthy from Annaclone, Down wrote a letter to Martinez, explaining that his school was linked with others around Europe with the Erasmus programme and asking how preparation was going for the World Cup in Russia this year. 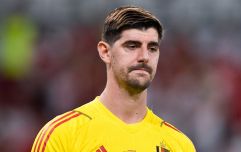 END_OF_DOCUMENT_TOKEN_TO_BE_REPLACED

In the original letter, Charlie introduced himself, controversially describing himself as a supporter of Everton's rival team, Liverpool.

He also asked some questions like: "Is your team excited about the World Cup in Russia? What is it like to be the manager of one of the best teams in the world?"

When a P6 footballing fanatic puts down on paper how much he loves the @BelRedDevils & presents it to the Principal as independent work over half-term...absolutely privileged to work with such brilliant minds & pro-active children! Charlie can’t wait for the @FIFAcom #worldcup🏆 pic.twitter.com/IDuqffarBX

Imagine Charlie's surprise when Martinez took the time out of his day to record a message and send it back to him via the Belgium team's Twitter account.

Martinez said that Charlie's letter had brought a smile to everyone in the Belgian federation, and he was amazed at the youngster's knowledge of Belgian football. 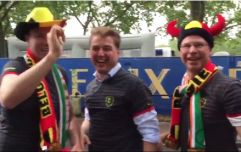 WATCH: These Belgium fans must be closet Irish supporters with jerseys like these

END_OF_DOCUMENT_TOKEN_TO_BE_REPLACED

To answer some of Charlie's questions, he said that Belgium are looking forward to the World Cup and that they would be doing their all to win the game.

"All the way from Tubize to everyone in your town and Northern Ireland have a fantastic world cup and don't forget to support us," he said.

popular
Harvard study reveals how many times men should ejaculate each month to stay healthy
Colin Farrell shouldn't win the Oscar this year
Netflix has just added one of the best sci-fi movies of recent years
Parents left in shock after gorillas start mating in front of kids at zoo
The 50 most iconic songs of all time* have been revealed
Conor Mcgregor hit by car ‘at full speed’ while cycling
New sci-fi horror set to be this year's A Quiet Place
You may also like
8 months ago
Belgium becomes first nation to introduce compulsory monkeypox quarantine
1 year ago
First case of new Covid-19 variant in Europe detected in Belgium
2 years ago
12-year-old girl in Belgium becomes youngest person in Europe to die from coronavirus
3 years ago
12 migrants found alive in the back of a refrigerated lorry in Belgium
4 years ago
Ryanair cabin crew in five countries plan to go ahead with strike action next week
4 years ago
Two police officers and civilian shot dead, others wounded as woman held hostage in Belgium
Next Page