The Rock is getting the nostalgia feels ahead of Wrestlemania 32 and has just shared this behind the scenes story about Stone Cold.

In a quick Instagram post, The Rock takes us back to Wrestlemania 15 in 1999, where the People's Champ featured in the main event against Stone Cold Steve Austin.

Apparently, although The Rock was the WWE/F World Champion at the time, didn't quite have the rub with the higher-ups and those in the changing room that he was the man to close out Wrestlemania. 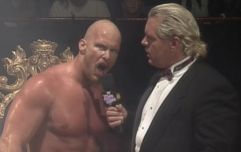 END_OF_DOCUMENT_TOKEN_TO_BE_REPLACED

Which is where everyone's favourite beer-drinking Texan comes in.

It looks like it was Stone Cold who gave everyone's favourite movie star tips with how to deal with complaints.

His advice? A succinct "F*ck those motherf*ckers".

The full story of behind the classic battle can be found below. While we wait for Stone Cold to open up a motivational speaker course, why don't you check out our JOE guide to "What You Can Learn From Professional Wrestling".

Wrestlemania 32 will be in part hosted by The Rock this on April 4th at 1am GMT. It will be available to watch on the WWE Network.

popular
Gardaí warning people not to make unnecessary journeys in anticipation of Storm Barra
Man dies after being attacked by newly calved cow in Mayo
Carlow woman banned from keeping animals for life after starving dogs to death
This new rom-com about writing a Christmas #1 is absolutely going to make you cry (in a good way!)
A terrific crime thriller is among the movies on TV tonight
The JOE Movie Quiz: Week 131
"Danger to life" risk with Storm Barra "weather bomb", warns Met Éireann
You may also like
4 weeks ago
Vin Diesel has publicly invited The Rock to rejoin the family and take part in Fast & Furious 10
3 months ago
WATCH: The first trailer for Red Notice is here, Netflix's biggest ever movie
4 months ago
Dwayne 'The Rock' Johnson says gruesome injury is the reason why he doesn't have six pack abs
4 months ago
Netflix announces release date for Red Notice, their most expensive movie to date
6 months ago
The original choice for Hobbs in Fast Five would have made it a completely different film
8 months ago
The Rock's leg day routine is one of the toughest workouts ever
Next Page