Cristiano Ronaldo has won his fifth Ballon d’Or award for the year’s best player this evening.

The ceremony, held at the Eiffel Tower in Paris this evening allowed for the Real Madrid forward to draw him level alongside Barcelona rival Lionel Messi. Both footballers now boast five Ballon d’Ors, two of which Ronaldo has won in succession.

The 32-year-old Portuguese sportsman, who has just recently become a dad for the fourth time, was the top-scorer in last season’s Champions League as Real Madrid claimed victory over Juventus in June. As well that that, the former Manchester United player helped his home country win Euro 2016, while scoring 42 goals for Real in all competitions as they won their 33rd La Liga title and 12th European Cup.

He scored twice in a 4-1 Champions League final win over Juventus and netted 25 times in 29 league games as Los Blancos finished three points ahead of Barcelona. 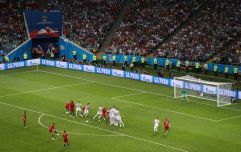 END_OF_DOCUMENT_TOKEN_TO_BE_REPLACED

"This is something I look forward to every year," he said, after receiving the award on the Eiffel Tower in Paris.

"Thanks to my Real Madrid team-mates. And I want to thank the rest of the people who helped me reach this level.''

Ronaldo also won the Fifa Men’s Player of the Year award in October.

popular
Amazon Prime Video has just added 21 big movies to its library
Emirates is looking to hire cabin crew members in Ireland for tax-free jobs
Amber Heard "fought really hard" to appear in Aquaman 2 despite pared down role
Shock as dead dolphin vandalised with graffiti on Dublin beach
One of Liam Neeson's best ever performances is among the movies on TV tonight
The six Eurovision countries with "irregular voting patterns" have been revealed
Fianna Fáil denies paying for bots to boost Stephen Donnelly tweet
You may also like
2 years ago
QUIZ: How well do you remember Zinedine Zidane's playing career?
3 years ago
Liverpool goalkeeper Loris Karius writes emotional apology to fans
3 years ago
Gareth Bale's breathtaking volley somehow tops Karius' catastrophic clangers
3 years ago
QUIZ: Name every club that has won the European Cup/Champions League
1 year ago
Four Irish players propelled into Lions debate after England hiding
1 year ago
Craig Casey and Johnny Sexton combination backed for Italy clash
Next Page