The family of Formula One legend Michael Schumacher are at his bedside as he continues to fight for his life following a skiing accident at a resort in the French Alps on Sunday.

Schumacher has been in a medically induced coma at a hospital in Grenoble since being moved there on Sunday following an accident at the resort of Meribel, where he hit his head while skiing off-piste with his son.

After initial reports suggested that the injuries suffered by Schumacher were not serious, it soon emerged that the seven-time Formula One Champion’s life was in danger and that had he not been wearing a helmet, he would not have survived the accident such was the extent of the impact.

END_OF_DOCUMENT_TOKEN_TO_BE_REPLACED

Schumacher’s wife Corinna, daughter Gina Maria, son Mick and manager Sabine Kehm have been holding a vigil at Schumacher’s bedside in recent days and Kehm is quoted on the BBC website as saying that "the family is not doing very well, obviously. They are shocked."

Prof Jean-Francois Payen, of Grenoble University Hospital's intensive care unit, told reporters that they are working “hour by hour” in an effort to save Schumacher’s life and while he was unable to give a prognosis, there have been instances in which people have recovered from similar injuries in the past.

The 44-year old German could remain in a coma for several days or even weeks and faces a long road to recovery if he can pull through; fingers crossed he can do just that.

UPDATE: At a press conference this morning, it was revealed that Schumacher underwent a second operation to reduce pressure on his brain on Monday night, that there has been a slight improvement in his condition and that he has shown signs that his situation is better controlled than it was yesterday. 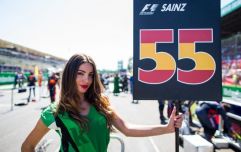 END_OF_DOCUMENT_TOKEN_TO_BE_REPLACED

"We can't say he is out of danger but we have gained more time, the hours to come are still crucial to the outcome," Schumacher’s doctors said at a news conference this morning.

"It is better than yesterday," the medical team added. "But all the family is very much aware that his state is still sensitive and anything can happen."

The doctors added that they are regularly supervising the situation on an hourly basis and were unable to give any further information at this time.

popular
QUIZ: Test your knowledge with this Ultimate Friends Character Quiz
Details of cash payments and Christmas bonus outlined in Sinn Féin’s alternative budget
The JOE Friday Pub Quiz: Week 313
House Of The Dragon is already better than Game Of Thrones
A brilliant psychological thriller is among the movies on TV tonight
One of the best films nobody went to see turns 15 years old this week
Couple caught having sex in public during Lisdoonvarna matchmaking festival
You may also like
2 months ago
Bernie Ecclestone says he'd "take a bullet for Putin" in bizarre GMB interview
5 months ago
'Drive to Survive but for bikes' is coming to Netflix
6 months ago
Formula 1 to speak to Drive to Survive producers over "distorting" of rivalries
1 year ago
Season 3 of Drive to Survive coming to Netflix next month
3 years ago
Netflix has a brand new Formula 1 series from the makers of Senna
7 years ago
Video: Accidental handjob action on the big screen at the British Grand Prix
Next Page