Seamus Coleman has donated €3,000 to an Irishman living with scoliosis

Jason Hanlon is a 26-year-old man from Dungloe in Donegal. Jason has profound learning disabilities and also lives with severe scoliosis.

In recent years, his scoliosis has progressed so rapidly that it is now crushing down on his organs causing excruciating pain 24/7. 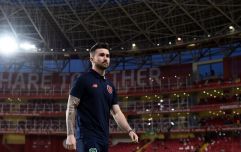 Here's the Ireland team named to play Turkey this evening

END_OF_DOCUMENT_TOKEN_TO_BE_REPLACED

His sister wrote about his situation, saying: "To sit and watch my brother scream 24/7 with tears streaming down his wee face is unbearable for my family and I. It is very difficult not being able to explain to him what is happening to his own body as you can imagine."

As a result of this, he needs an expensive operation in Tallaght Hospital which will attempt to ease his suffering, and help him in any way possible.

The family set up a GoFundMe page to try and raise money for the operation, as well as to help cover the costs for the renovations of the family home and specialised equipment needed for his aftercare. It will also help support family members to stay in Dublin during Jason’s recovery.

And even Ireland's national team's very own Seamus Coleman has done his bit.

The Donegal man and Everton fullback donated €3,000 to the GoFundMe page.

This isn't the first bit of philanthropy that Coleman has taken part in lately either. He also donated €5,000 to the Sean Cox's GoFundMe a couple of weeks ago.

That's why we love you Seamie.

The Big Reviewski || JOE · The Big Reviewski with Y: The Last Man, that Malignant ending & a secret streaming service
popular
The 50 most iconic songs of all time* have been revealed
Ranking the 10 most passive-aggressive ways to end a text conversation
PICS: The man with the biggest penis in the world has one unbelievable problem with it
"One person's rent is another person's income" – Varadkar rejects calls for three-year rent freeze
People think they've figured out the ranking of the viewers on your Instagram Stories
Almost 25 years on, one of the stars of Face/Off tells a personal Nic Cage story
You could be shopping in an Aldi store with no checkouts in Ireland in the near future
You may also like
3 years ago
“Wow, out for 10 months, first game back?” Sam Allardyce blown away by Seamus Coleman’s comeback
3 years ago
Everton set the stage brilliantly for Seamus Coleman's big comeback tonight
3 years ago
Two Irish Everton fans share heartwarming tale of an incredibly kind gesture by Seamus Coleman
4 years ago
PIC: Everton fans unfurl quality banner for the injured Seamus Coleman on Sunday
4 years ago
VIDEO: Liverpool fans sing sickening chant mocking Seamus Coleman's injury
8 months ago
All roads lead to Cheltenham after a busy Christmas period of shocks
Next Page