Previously, Irish viewers could only tune in to the NBA with an eirSport/BT Sport package. Now, the world's biggest basketball league has announced its first ever partnership with Sky Sports.

The four-year deal boasts the most extensive coverage of the NBA ever seen in Ireland, and will feature more than 170 live games and a record number of live weekend primetime games starting from 8.30pm Irish time.

END_OF_DOCUMENT_TOKEN_TO_BE_REPLACED

According to Sky Sports: "The new season is just hours away, tipping off on Wednesday morning with a star-stubbed double-header headlined by the defending champions Golden State Warriors and their superstar Steph Curry beginning their defence of the title at home to Oklahoma City Thunder.

"Prior to that game, the season and Sky Sports' coverage begins at 1am with the Philadelphia 76ers visiting the Boston Celtics - the culmination of a blockbuster start to the season that will feature 48 hours of continuous NBA action on a special Sky Sports Arena takeover." 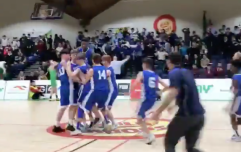 WATCH: There was some serious drama at the end of the Schools Cup basketball final

END_OF_DOCUMENT_TOKEN_TO_BE_REPLACED

There are plenty of talking points ahead of the new NBA season, including LeBron James' first ever season with the LA Lakers.

The partnership will also see live games and highlights of the WNBA (Women's National Basketball Association) starting with the 2019 season that tips off in May.