Steve McClaren has been sacked as Newcastle manager, with Rafa Benitez set to take over

It was a long time in coming.

Steve McClaren has been sacked as the manager of Newcastle United.

The former England coach has endured a largely disastrous spell since taking over at St. James' Park last summer and the final straw came with Newcastle's 3-1 home defeat to Bournemouth last weekend.

Eventually Newcastle have sacked Steve McClaren. Talk about dragging it out!

Newcastle's Managing Director Lee Charnley has released this statement in relation to the news:

"I would like to thank Steve personally for his services to Newcastle United.

"He is a man of integrity and class and he has conducted himself with great dignity during this difficult time.

"He has the utmost respect of all the players, staff and management and he leaves with our very best wishes and sincere thanks. 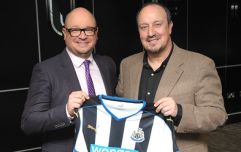 Newcastle United have appointed Rafa Benitez as their new manager

END_OF_DOCUMENT_TOKEN_TO_BE_REPLACED

"We feel that a change is now needed in order to give the Club the best possible chance of securing its Premier League future.

"A further announcement on a successor to Steve will be made in due course."

There is widespread speculation that Rafa Benitez has already been offered a three-year deal to take over at Newcastle.

We understand Newcastle's board will meet face-to-face with Rafa Benitez for the first time in Newcastle later today.

The former Liverpool boss is currently a free agent after his short reign as Real Madrid manager ended earlier this season.


popular
Someone in Ireland is €311,413 richer after Wednesday's Lotto draw
Google announces Stadia Pro is now available free for two months
QUIZ: Can you name all of these characters from Love/Hate?
Gardaí set up checkpoints on major roads across the country to stop Easter travel
Here's Week 27 of JOE's 19 in 90 quickfire quiz
Here are the best movies on TV today
Here’s how to play for the record €90 million Eurojackpot from Ireland this Friday
You may also like
1 year ago
Man has first drink in eight months, ends up punching a tree in half
1 year ago
Drunk man buys a gigantic Pokémon after having a few, epic quest to get Snorlax delivered starts
4 years ago
Will this man be Liverpool's next summer signing?
4 years ago
Newcastle boss accuses his own player of getting sent off on purpose
4 years ago
Vine: Jonas Gutierrez was given an amazing reception when coming on at Anfield last night
4 years ago
Pic: Paddy Power sparks outrage with incredibly crass tweet ahead of Liverpool v Newcastle
Next Page