Super Bowl 50: What it would be like if it involved the cast of Friday Night Lights

The 50th edition of one of the biggest sporting events on the planet, the Superbowl, takes place in Santa Clara, California on Sunday night.

The worldwide TV audience of millions will include thousands of Irish NFL fans, many of whom will be deeply familiar with Friday Night Lights, the TV show based on the exploits of fictional high-school football team, the Dillon Panthers.

END_OF_DOCUMENT_TOKEN_TO_BE_REPLACED

Tenuous though the link between the Superbowl and the show may be, we know through past experience just how much the show appeals to our audience.

With that in mind, just for a bit of fun, we’ve looked at the major players for Sunday’s main event and imagined who from the show they’d most closely resemble if the worlds of fact and fiction collided.

Becky’s girl-next-door persona is a little bit at odds with Lady Gaga’s colourful and at times eccentric manner, but both of them are well able to hold a note.

END_OF_DOCUMENT_TOKEN_TO_BE_REPLACED

Nearly 70,000 people in the Levi’s Stadium in Santa Clara is a little different from a handful of folks at East Dillon field, but having been through what she’s been through and come out the right side of it, we’re sure Becky could handle the pressure.

END_OF_DOCUMENT_TOKEN_TO_BE_REPLACED

There’s only man from Dillon who could even attempt to fill Cam Newton’s shoes and that’s East Dillon’s Vince Howard.

Cocky but well able to back it up, as comfortable running with the ball as he is passing it and with star quality that stands out a mile away, Vince and Cam might as well be brothers from another mother.

Cam’s Dad was even embroiled in controversy for some dodgy dealings with college football teams when his son on his way to becoming a star, much like Ornette Howard played fast and loose with his son’s football future when he got out of jail.

The parallels are almost too perfect.

Honest, full of heart and so reliable you could set your watch by him, Luke Kuechly of the Carolina Panthers has more in common with East Dillon’s Luke Cafferty than just his first name.

Religion forms a large part of both of their backgrounds, as does the outdoors, although whether Kuechly is in the habit of giving pigs to his team-mates in his spare time we have no idea.

Talib may be a quieter figure these days than in his past, but his rap sheet is so long that not even a quiet word on his behalf from Coach Taylor would have spared him punishment back in the day.

Aggravated assault, battery, resisting arrest, Talib’s crimes were a little bit more serious than the petty mischief Riggins used to get up to in Dillon, but much like Riggins, his team-mates love him and he has a habit of scoring crucial touchdowns too.

For the most part Rivera is as cool and calm as Eric Taylor is on the sideline, although Taylor was prone to lose his cool a little more often than Riverboat Ron.

Both are unafraid to back their convictions and take a risk when required and you can imagine Taylor delivering the type of speech that Rivera delivered in the locker room a little earlier this season.

We can never envisage Coldplay experimenting with the speed metal favoured by Landry Clarke and his Crucifictorious bandmates, but there are similarities between them all the same.

For one, there’s a distinct whiff of vulnerability about both front men.

Also, we can’t help but think that Gwyneth Paltrow saying that former lover Chris Martin is now like a brother to her is the source of ribbing from his bandmates, much like Landry used to get for allowing the various women in his life to walk all over him.

America’s Golden Boy, Peyton Manning is what Jason Street would ultimately have become in Friday Night Lights had paralysis not ended his career in devastating fashion.

A more traditional quarter-back with a tremendous arm and ice-cool temperament, he’s the type of guy that has mothers thinking ‘future son-in-law’ from the moment they set eyes on him.

Considering he was once part of a deadly duo called Smash and Dash, Demayrius Thomas (he was Dash) seems like a perfect fit for star running back of the Dillon Panthers, Brian ‘Smash’ Williams, but the similarities don’t stop there.

Sure, they might not have played in the same position, but they were both high-school stars, they can both run very, very fast and Jesus plays a big role in both of their lives. Unconfirmed reports suggest that Thomas was on his way to a big career in Alamo Freeze until football got in the way.

Marshall and Saracen are chalk and cheese in terms of what they're like on the pitch, but one thing they have in common is that you can't help but root for them both.

Marshall was recently honoured with the Darrent Williams 'Good Guy' award for his enthusiasm and co-operation with the media, while Matty has carried himself through his many setbacks with such quiet dignity that he's probably the most likeable character in the show.

You didn’t think we were going to let a Friday Night Lights article go without mentioning Lyla, did you? 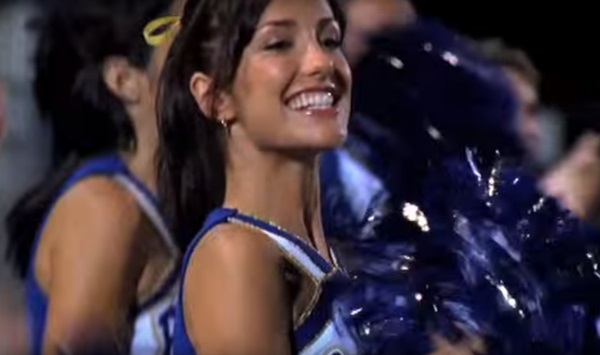