"We stand together. We are Sweden. F**k racism."

Having conceded the crucial, match-deciding free kick in the dying seconds of the World Cup Group F match against Germany on Saturday night, Sweden's Jimmy Durmaz was likely feeling pretty awful about himself.

Toni Kroos duly swept the ball into the top corner with an audacious moment of nerve and skill, with Sweden ultimately blowing their early advantage over the world champions.

END_OF_DOCUMENT_TOKEN_TO_BE_REPLACED

Shortly after, Durmaz, born in Sweden to Assyrian parents, was targeted online by racist trolls with an axe to grind.

His Instragram account, which averages a modest amount of comments on a normal day, blew up, with his most recent post amassing over 36,500 comments at time of writing.

Among those comments; a torrent of racial abuse and threats of physical violence towards Durmaz.

Swedish police are expected to investigate the incident, and the Swedish FA have also stepped in to defend their player.

"The Swedish Football Association filed it so that Jimmy can focus on what he is here for - to play football."

Durmaz, who was also defended by his teammates, took the time on Sunday to address the situation following a training session. 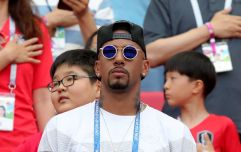 END_OF_DOCUMENT_TOKEN_TO_BE_REPLACED

Flanked by his squad and coaching staff, the winger read out a powerful speech that concluded with the following words:

"I'm Swedish, and with pride I wear this shirt and our flag," he began.

"At the same time, I want to thank all the wonderful people out there who are spreading happiness. We stand together. We are Sweden. Fuck racism."

Those final two words were echoed by those standing with Durmaz, and rightly so.

popular
New Netflix series looks like a must-watch for fans of Drive to Survive
The JOE Friday Pub Quiz: Week 279
Jenny Greene to leave RTÉ 2FM's Drive Time to host new show
The full list of all the new shows and movies coming to Netflix in February
The 50 most iconic songs of all time* have been revealed
Gardaí release CCTV footage of last known whereabouts of Bernadette Connolly
One of the best Westerns of all time is among the movies on TV tonight
You may also like
4 days ago
One person killed and three wounded in lecture hall shooting in Heidelberg
1 month ago
Several people injured in Germany after old aircraft bomb explodes
6 months ago
France to outlaw shredding and gassing of male chicks by 2022
1 year ago
Bodies of five children found in German apartment
1 year ago
Germany bans gatherings of more than two people
2 years ago
Hash cake accidentally served at German funeral
Next Page