Not many people are giving Meath much of a chance against Dublin in the Leinster Final next weekend, but this might frighten Dubs followers just a little bit... bitch.

Odds of 15/2 for a Meath win shows just how much of a surprise a Royal victory against a rampant Dubs outfit in Croke Park would be next Sunday, even if, historically, Meath have never feared the Dubs and have turned them over when not expected to do so many times in the past.

Rather than being burdened by the size of the task facing them, Meath will be looking to strike fear into their opponents and the folks at Drumree GAA club have come up with an effective way of doing just that.

They’ve put together a Breaking Bad-inspired and very menacing look meme which suggests that the men in green and gold will be out to stop Bernard Brogan in particular next weekend, considering that Alan is unlikely to return from injury in time. 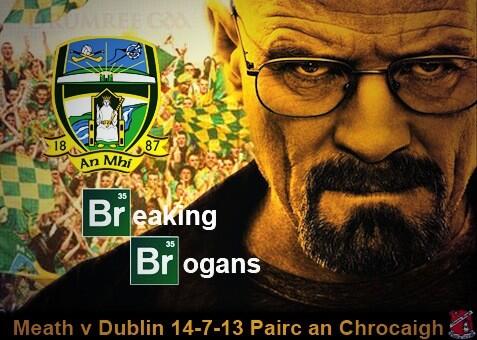 The problem for Meath is that the Dubs have so many attacking options these days that silencing Bernard is not even half the battle but it’s a sure sign of their intent nonetheless, yo.

Hat-tip to Drumree GAA club for sending this one into us.

popular
Fish and chips could be removed from Irish menus over rising fuel costs
Netflix has just added 33 very big movies to its library
Increase in passenger charges at Dublin Airport may be on the way
The full list of cancelled flights in and out of Dublin Airport on Monday (so far)
The long-awaited MetroLink is finally happening, for real this time, honest
Jordan Peterson suspended from Twitter over Elliot Page comment, says he won't apologise
Government considering giving public €200 again to assist with rising energy costs
You may also like
4 hours ago
COMPETITION: WIN a whiskey blending class in Dublin for you and a friend
5 days ago
Get ready for an epic All Out Summer Adventure with these coastal trips to Mayo and Dublin
1 week ago
Wheelchair user dies after falling into the water at Dún Laoghaire pier
1 week ago
Dublin is now on the global map as one of the best places to celebrate Pride
1 week ago
7 new and exciting Dublin attractions you need to try this summer
1 week ago
Woman seriously injured in two-vehicle collision in Dublin
Next Page