The BURNING QUESTION - Where does today's drawn All-Ireland final leave THE CURSE?

The greatest story in GAA just got spookier right?

The Mayo GAA CURSE is unquestionably one of sport's most compelling subplots. Even the BBC had a go at explaining it to their audience this week.

It's funny (*hastily adds "for neutrals"*), it's weird, it's simultaneously illogical and almost plausible given the rotten, rotten luck they've endured.

Before today's game according to at least one respected GAA pundit (Martin Carney) there has never been an own goal in an All-Ireland final. 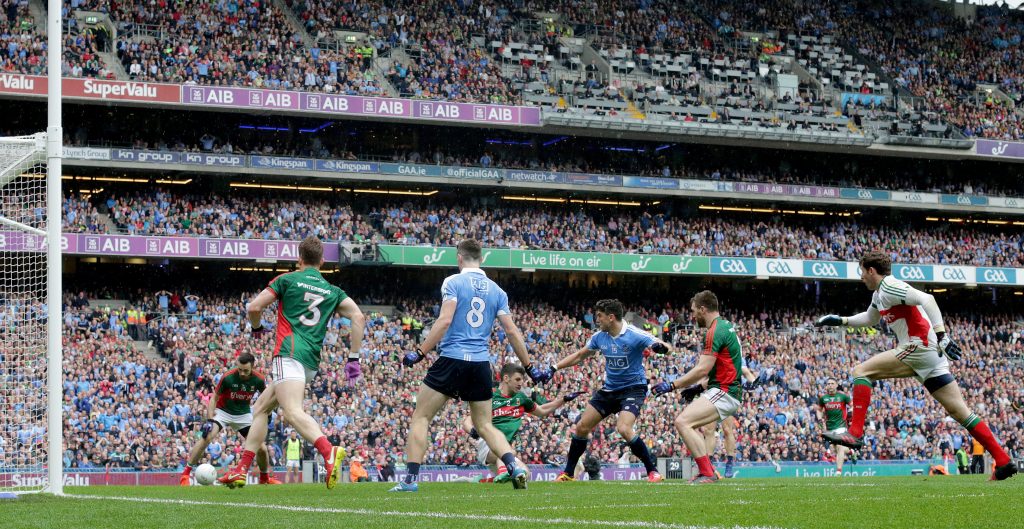 Now, it's worth pointing out that there's every chance that somewhere along the way, back in the olden days that even Martin has forgotten about, there's probably been an OG scored in an All-Ireland football final. Law of averages etc.

But I'm happy to go out on a limb here and categorically say that there has NEVER been two OGs scored by a team in a final.

Mayo, who have lost 7 (ffs SEVEN) consecutive All-Ireland Finals since the curse... sorry THE CURSE... reared it's ugly head in 1951, managed to score two within the first 22 minutes of today's game.

We know that Mayo and Dublin drew today and they'll do it all again in two weeks, but let's be honest, the burning question now is - where does all of that leave THE CURSE?

Two Own Goals. The mist. The greyness. The wides. Tom Parson's hair. The curse lives on. #DUBvMAYO

Mayo have scored TWO own-goals in the first 25 mins.
The curse is real! @KarinBBC @BBCNews

It definitely exists anyway that's for sure...

But what about THE CURSE? #DUBvMAYO

Bloody hell the curse is real

Right so the curse must actually be a thing. Two own goals 🙈 #DUBvMAY

Because how else can you explain the OGs right?

The curse is still pretty much there #MayoVDub

Yikes, what if it gets worse from here?

But there is hope, THE CURSE can be beaten (presumably by getting Michelle Mulherin tickets for the replay)

The curse can only be broken by undoing he damage, or by a good deed https://t.co/qDXpSP4Xaj

Message to #Mayo footballers and fans. Not one more word about the 2 O.G.s. Just let on the Dubs put 'em in and get on with it. #mayoforsam

If you are in any way interested in GAA or Mayo football or just hairy aul yarns, you probably know the story of THE CURSE. But, its worth a retell.

The legend goes that the last Mayo team to win an All-Ireland football final in 1951 were returning home from their triumph and passing through the town of Foxford. The team, who were probably concentrating on enjoying the occasion (sure you'd never know when you'd win one again?), failed to respect a funeral ceremony.

The local parish priest decided to put a curse on the Mayo football team to never win a future All-Ireland final. Some versions of the story say it can will be broken when every member of that team has passed away.

popular
Amazon Prime Video has just added 16 big movies to its library
13 reasons why an employer can decline your right to remote working under new legislation
Neil Young wants Spotify to remove his music because of Joe Rogan podcast
Prince's team stop Nothing Compares 2 U being used in new Sinead O'Connor doc
UCD students provided with €30 gift voucher after toilets were contaminated with wastewater
QUIZ: We bet you can't get full marks in this extremely frustrating geography quiz
China gives Fight Club a new ending, manages to completely change the plot of the movie
You may also like
3 months ago
Wicklow GAA to investigate fight after Under 15 match on Saturday
1 year ago
Post-match celebrations and a lack of social distancing at certain events put club game on hold
1 year ago
Cork GAA pleads with clubs and supporters “not to engage in celebrations that breach current guidelines”
1 year ago
What's the Bronco test and why it may come up in conversation this week
1 year ago
The Andy Moran GAA Isolation Workout
1 year ago
SuperValu, Centra and the GAA team up on initiative to support elderly people
Next Page