The lads from Arsenal Fan TV are in Dublin

Ever wanted to appear on Arsenal Fan TV? Now's your chance.

Last season saw Arsenal Fan TV become one of the most popular sports channels on the internet.

We do suggest that looking at it as a 'sports channel' might be the wrong term, as it very often just results in a bunch of grown men shouting at each other...

But it's football they shout about. Arsenal in particular.

And if you ever wanted a chance to appear on Arsenal Fan TV, now is your time to shine. 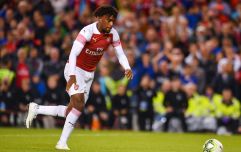 END_OF_DOCUMENT_TOKEN_TO_BE_REPLACED

Robbie and Troopz are in Dublin today for the pre-season friendly between Arsenal and Chelsea in the Aviva Stadium tonight at 8pm.

People can't wait to see what the lads will be like this season, as the complaints were normally about Arsene Wenger.

Wenger left after 21 years in charge of the club, and was replaced by Unai Emery.

We give it about six months before 'Emery Out' is the title of their most viewed video...

popular
Met Éireann issues weather warning for three counties
An underrated Jason Statham thriller is among the movies on TV tonight
QUIZ: Take your very best shot in this tough General Knowledge Quiz
QUIZ: Can you conquer this delightfully difficult General Knowledge Quiz?
The 50 most iconic songs of all time* have been revealed
The JOE Movie Quiz: Week 160
The JOE Friday Pub Quiz: Week 300 - the Triple Century
You may also like
2 years ago
Arsenal manager Mikel Arteta tests positive for Covid-19
3 years ago
WATCH: Matteo Guendouzi celebrates with Arsenal fans after North London derby win
3 years ago
Arsene Wenger has finally explained the infamous trouble he has with zips
1 year ago
Four Irish players propelled into Lions debate after England hiding
1 year ago
Craig Casey and Johnny Sexton combination backed for Italy clash
1 year ago
Defence grows for Billy Burns after one of the roughest days of his rugby career
Next Page