The Noise from Brazil: More on that terrible Germany free-kick, Google’s most-searched for World Cup XI and Chilean striker gets permanent reminder of THAT miss

Everything about that terrible Germany free-kick was planned, apparently, Google's most searched for World Cup XI has a few surprises and Chile striker Mauricio Pinilla has decided he wants to be reminded of that painful miss against Brazil for ever.

That terrible Germany free-kick was planned after all

As good as Algeria were last night – and they were absolutely brilliant – it’s fair to say that Germany were operating at a level far below their best and a hilariously-executed free-kick shortly before the end appeared to sum up how bad Jogi Low’s side were on the night.

END_OF_DOCUMENT_TOKEN_TO_BE_REPLACED

While you could tell that there was the genesis of a good idea behind it all, it all fell apart, quite literally, when Thomas Muller stumbled in the build-up before Toni Kroos delivered a quite lame chip into the area and it was easily cleared by the Algerian defence.

Everyone watching would have assumed that a massive systems failure had taken place, but according to respected journalist Raphael Honigstein (you may know him from Football Weekly and BT Sport amongst other things), German defender Benedikt Höwedes revealed that the entire thing was planned, including Muller’s fall in the build-up.

Höwedes: "We practiced that free-kick in training. The final chip wasn't right"

END_OF_DOCUMENT_TOKEN_TO_BE_REPLACED

Planned or not, it will clearly take a lot of refining before they can pull it off and seeing as the surprise element is now gone, it’s unlikely to be tried again at this World Cup. Maybe they’ll wait until they play Ireland in the Euro 2016 qualifiers; going on recent evidence the Germans can seemingly do nothing wrong when they come up against the Boys in Green after all.

END_OF_DOCUMENT_TOKEN_TO_BE_REPLACED

We’re not even exaggerating when we say that 99.9 per cent of JOE’s time over the last couple of weeks has been spent on matters World Cup related and it would appear as if we’re not the only ones on the Internet obsessed with events in Brazil.

Having already created a few ingenious World Cup doodles, Google have come up with an XI of the most-searched for players at the World Cup and before you take a look below, we reckon that you can guess at least seven of the players who made the final cut. 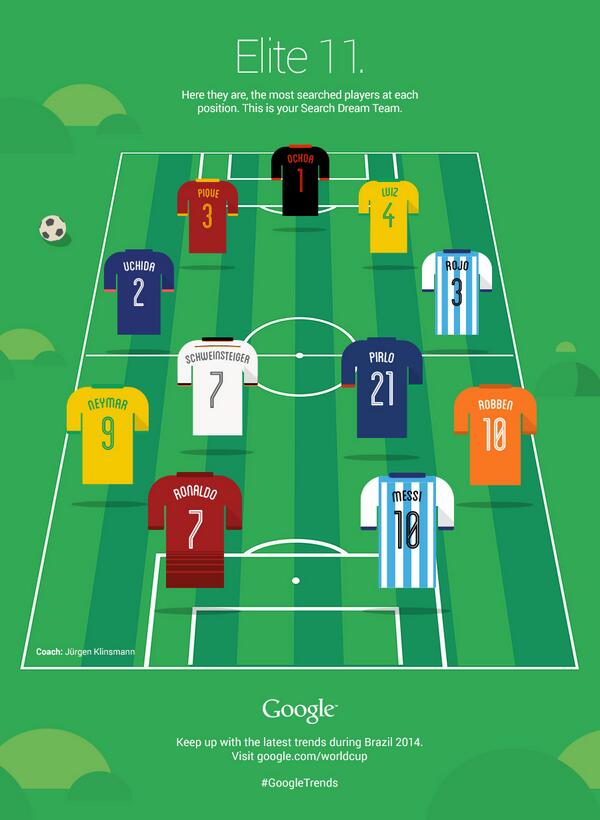 The inclusion of Guillermo Ochoa is thoroughly deserved given the quality of his performances between the sticks for Mexico and while we’re not sure what Japanese full-back Atsuto Uchida did to merit such interest on the Google search engines – being linked with a move to Arsenal, perhaps? – we’re delighted that one of our boys from JOEpan made the cut after what was a pretty disappointing tournament for the squad and their biggest fans here in JOE Towers.

We don’t know about you, but if we came within inches of knocking the hosts out of the World Cup in the dying seconds of extra-time before subsequently losing on penalties, we’d want to forget about it as soon as possible.

A mere two days after Chile’s exit from the competition, Chilean striker Mauricio Pinilla decided he wanted the memory of that miss etched on his being forever in the form of a tattoo on his back that recreates the fateful moment in fairly impressive fashion alongside the line ‘One centimetre from glory’. 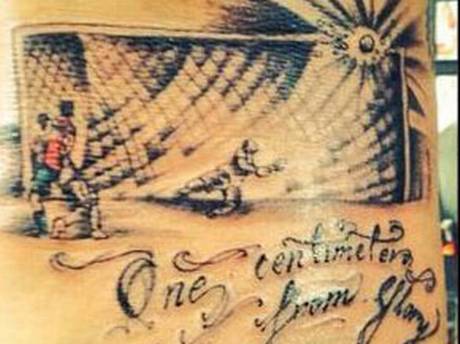 Maybe Pinilla feels that the tattoo will prove cathartic and is the best method of being able to deal with what happened, but considering the line mentioned above, it’s a good job it’s on his back and not a little further to the south.