The Noise from Brazil: Robben’s dive in Google Doodle form, Capello called a ‘thief’ and no sex means no success

Arjen Robben’s dive has been Google Doodled, Fabio Capello might not be welcome in Russia anytime soon and lots of sex is the key to World Cup success.

One thing you would never accuse Google of is not having their finger on the pulse of what’s going down online and the Internet behemoth have been pretty spot on with their contributions to World Cup 2014 so far.

END_OF_DOCUMENT_TOKEN_TO_BE_REPLACED

Despite impressing with offerings like a World Cup XI based on the most-searched for players of the tournament so far, the World Cup inspired Google Doodles have stood out the most and it was only a matter of time before imitations started to surface, one of which was a bit naughty but tickled our funny bones this morning.

END_OF_DOCUMENT_TOKEN_TO_BE_REPLACED

Fabio Capello appears to us like a man to whom criticism is like water off a duck’s back, but even he might be slightly hurting from comments made by high-profile Russian politicians in the wake of Russia’s disappointing World Cup exit.

Chief among his critics is the notoriously controversial Liberal democratic leader Vladimir Zhirinovsky, who wants Capello dragged over the coals in front of the Russian parliament and has insisted that he should be fired if he doesn’t face the music.

“We need to look into his work and ask him to resign,” Zhirinovsky is quoted as saying in Russian media, in no way beating around the bush.

END_OF_DOCUMENT_TOKEN_TO_BE_REPLACED

“But he’s greedy, so of course he won’t. It’s pretty good to get [millions] for doing nothing. The team lost and it doesn’t affect his pay in any way. Thief!”

Zhirinovsky’s comments should be taken with a pinch of salt – this is guy who threatened to have his aides rape a pregnant journalist after all – but his comments will probably attract a bit of support considering that Capello is the highest paid of all the managers at the World Cup, earning approximately £6.7 million per year, 763 times the average per capita income in Russia.

Zhirinovsky didn’t stop there, however. “Even the way he looks makes it hard to like him,” he added. “He looks like a schoolteacher.”

We would have suggested he looked more like Postman Pat at stages during the tournament rather than a schoolteacher, but each to their own Vladimir. 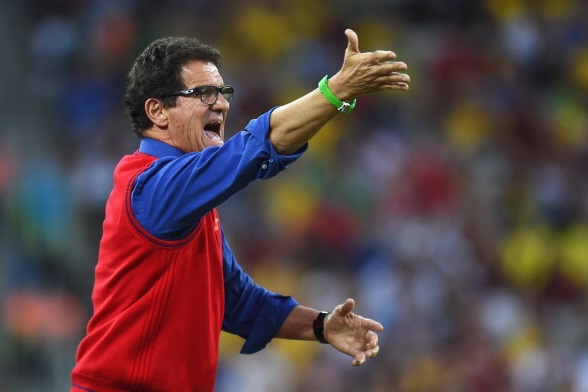 No sex means no success

The question of whether a spot of nookie immediately before an event has an effect on performance has long been debated in sporting circles, but it appears to have been blown out of the water at probably the biggest sporting event of all. Sort of.

It has emerged that the four teams who all imposed a no-sex rule throughout the tournament – Russia (as if Capello wasn’t unpopular enough) Bosnia and Herzegovina, Chile and Mexico - all exited the tournament relatively early, whereas a handful of teams who had no official policy on pre-match intercourse – Germany and Holland for example – are still there.

Of course this proves absolutely nothing whatsoever – Did Chile’s Gonzalo Jara miss the crucial penalty in the shoot-out against Brazil by a couple of inches because he hadn’t got his end away in a few weeks? – but it will be no doubt presented as scientific fact by international players to their managers ahead of major tournaments in the future.

As far as we’re concerned, players should be able to get up for a major tournament without worrying about getting it up regularly during it, but if it helps get a load off the players’, eh, minds, then who are we to argue?

popular
Amazon Prime Video has just added 38 very big movies to its library
The Banshees Of Inisherin is arriving on Disney+ sooner than you might expect
U2 drummer Larry Mullen Jr. says band may perform without him in 2023
Mia Khalifa claims seaside town is better than Miami
The 50 most iconic songs of all time* have been revealed
Dissection of a woman's body to be shown on Channel 4 tonight in TV first
21 jokes that are so bad they're actually brilliant (but still quite bad)
You may also like
3 days ago
The JOE Friday Pub Quiz: Week 323
1 week ago
Japan fans explain why they clean up after World Cup matches
1 week ago
The JOE Friday Pub Quiz: Week 322
1 week ago
Japan supporters clean up rubbish following famous win over Germany
1 week ago
ITV football pundit Nadia Nadim heartbroken as mother killed by a truck
1 week ago
Non-league side make approach for 37-year-old free agent after World Cup
Next Page