VIDEO: This Sky Sports reporter was taking no crap from a member of the public

Not on his watch.

It used to be something of a merry tradition; a cold and wet Sky Sports News reporter standing in front of gawking, gurning football fans whilst reeling off the latest 'facts' about a proposed loan move for Glen Johnson. Sadly all that is history. 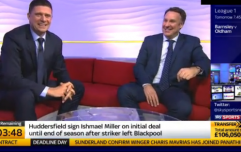 END_OF_DOCUMENT_TOKEN_TO_BE_REPLACED

As such, Wednesday's transfer deadline day passed us by in largely uneventful fashion, as far as vibrating pleasure rods in people's faces go at least. But there was one incident late into the night that was expertly dealt with by the SSN staff.

Sky man Charles Paterson was reporting from the base of Scotland's national team, presumably to clarify whether any players had been given special permission to leave and secure a move. But he was also joined by two unexpected special guests. 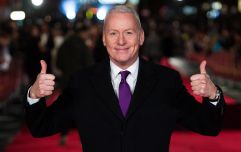 The 'morning after' reaction to another dull Transfer Deadline Day

END_OF_DOCUMENT_TOKEN_TO_BE_REPLACED

They were wedding crashers - or rather wedding guests who were crashing his live broadcast. The thing is, Charles was in no mood to indulge their possibly inebriated shenanigans. After all, he wasn't to know whether they were concealing rogue vibrators.

First a woman just yelled 'WAAAHAAAAYYYY!!!' down the camera lens, and then a cheeky chappy stood himself next to Paterson. Being something of a smartarse, he interjected the transfer report with: "We're not gonna take your deal!"

Charles wasn't having any of it and dealt with it all with SAS-style efficiency. He firmly shoved the bloke out of shot and commanding: "No! No! No! Thanks very much!"

What an absolute pro. And his ears kept their virginity intact too.

popular
20 years ago, one of the best sci-fi movies of the 21st century was a box-office bomb
U2 drummer Larry Mullen Jr. says band may perform without him in 2023
Peter Kay moved to tears on stage while opening his first stand-up tour in 12 years
The 50 most iconic songs of all time* have been revealed
Mia Khalifa claims seaside town is better than Miami
Simon Cowell concerns fans with appearance as they 'don't recognise him'
The JOE Movie Quiz: Week 182
You may also like
4 years ago
The JOE Friday Pub Quiz: Week 67
7 years ago
Pic: That's Gas! The sneakiest way to follow Transfer Deadline Day while you're at work
7 years ago
Pic: An office in Newry is taking this Transfer Deadline Day craic to the next level
8 years ago
Vine: Nothing to see here, just an Everton fan waving a dildo on Sky Sports News on Deadline Day
8 years ago
Transfer Deadline Day Live Blog as it happened
8 years ago
Rodgers refuses to blame Ian Ayre for failure to land copy and paste's Yevhen Konoplyanka
Next Page