The lads at WhoScored have crunched the stats to produce a worst XI of the season so far, and it makes for grim reading for two irish internationals.

If you haven't heard of WhoScored, they are a fantastic football stats site that provides huge amounts of raw statistical data on football matches from around the world. An invaluable resource for digging behind the results, they are also famous for their rating system. Using over 200 separate stats they measure a player's performance, and influence, in games to give a mark ranging from six to 10.

This morning, they published a worst Premier League XI of the season so far, based on their ratings. The criteria required a player to have made 10 Premier League starts to qualify.

Bottom of the pile according to the stats is Norwich's Ricky van Wolfswinkel, proving that a great name does not a great player make. Ricky's failure to score with any of his last 23 shots, and with only three attempts on target all season, mean he is the lowest ranked Premeir League player, with 6.22.

Irish stopper Keiren Westwood (6.32) takes the keeper's jersey due to his low save percentage (60.4 per cent) and low passing accuracy (37 per cent, the worst of any player in the league).

The other Irish name to make it is Marc Wilson, who gets the nod as, according to the numbers, he is one of the most dribbled past defenders in the league.

You can see the full team below and check out teamtalk.com for more info on the team. 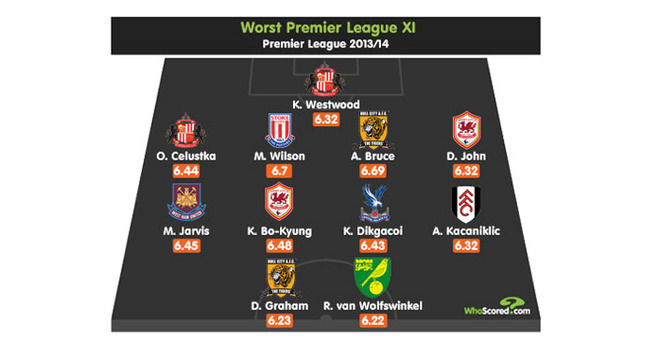 
popular
QUIZ: Can you guess the pixellated movie posters?
Shallow spectacle between Varadkar and Martin leaves the audience wanting less
QUIZ: Can you name all these European countries just from their vowels?
QUIZ: Week 16 of JOE's 19 in 90 quickfire quiz is here
Dublin pub to host a 'doggy date night' where you can bring your dog to dinner
"Totally unacceptable." Final year students at WIT hit out after extra module added to final semester
Here are Ireland’s favourite takeaways, as per the National Takeaway Awards
You may also like
2 weeks ago
The EA SPORTS™ FIFA 20 Team of the Year has been revealed
2 weeks ago
WATCH: Clinton Morrison stole the show doing punditry this weekend with a moment of brilliance
1 month ago
Here's how you can vote for EA SPORTS™ FIFA Team of the Year
1 month ago
The JOE Friday Pub Quiz: Week 169
1 month ago
Football, beef and the IRA - RTÉ's documentary on League of Ireland players in Libya looks great
3 months ago
Post-match analysis of the Rebekah Vardy/Coleen Rooney beef
Next Page