When the Ireland squad for November's Guinness Series was announced, the biggest reactions were sparked by the inclusion of Irish-qualified Bundee Aki and the omission of Simon Zebo. A second glance at the squad told us that Tiernan O'Halloran was also unlucky to miss out. Massively so.

Over the summer, the 26-year-old had made three Test appearances [one start] and had blitzed the USA. Against Japan, he twice did well off the bench. All told, in just over 120 minutes, he made 79 metres off 12 carries, five line breaks and he set up two tries. With Top 14-bound Zebo seemingly out in the cold, November was supposed to be the Connacht man's big break but it has not worked out that way.

O'Halloran joined The Hard Yards [from 25:00 below] to discuss his journey with the western province, Bundee Aki's Ireland call-up and his own admission from that squad.

"I got the call from Joe that week, saying that he was going to go with a different look to the squad and that I wasn't in it," O'Halloran says.

"I obviously knew that I'd had a couple of injuries - well, I've had one hip injury that has held me back a bit - I dropped out of a couple of games and I wasn't playing at 100%.

"I knew, or had a feeling, that I wasn't going to be in the squad. But no matter how much you tell yourself you might not be in it - even though you want to be in it - when you get that phone call it is still massively disappointing." 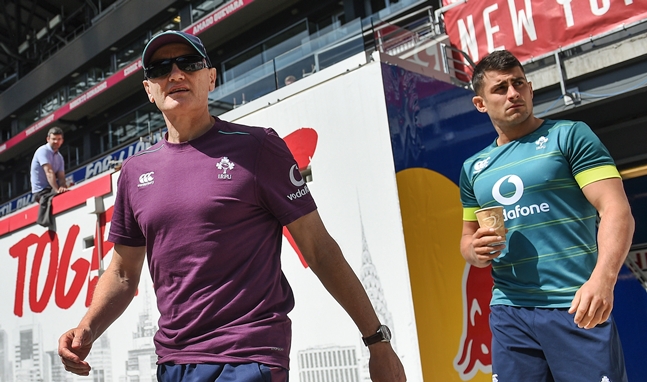 Having topped the PRO12 player tables, last season, for metres gained and torn it up in the summer with Ireland, on wonders what homework Schmidt has given O'Halloran if he is to get back into his squad. He says:

"Even after the summer tour, we had a camp [in late August] against you got your work-ons from that tour. There were things that you have to get better at. I've obviously had those chats with defence coaches and attack coaches about stuff I have to work on. That is something I am aware of all the time.

"The big one at the moment - and the one that Joe made - was that I wasn't playing consistently enough at the moment. I had the niggles and i was in and out of the [Connacht] squad. In fairness, that's how I got into the Irish squad in the first place, because I was playing consistently well with Connacht, in that back three units and scoring tries, controlling that back-field. That's what got my foot in the door with Joe."

Both O'Halloran and Zebo were, as fate would have it, starting fullbacks for Connacht's recent Guinness PRO14 win over Munster at The Sportsground. Both men had fine games in attack, scored tries for the side and, for all that it is worth, proved they were both in top form.

"That [game] happened the same week with Zeebs announcing he was heading off to France," O'Halloran notes.

"It's one where you are heading into that game with a lot of frustration. I looked at it as a game where I could take the shackles off a bit and just play with a bit more enjoyment and let out those frustrations.

"There where a couple of times when I let my frustrations out in the game, and things like that. But, look, it is massively disappointing not to be involved in an Ireland squad and in those November internationals. It's a good time now as I have a week off, next week. It may be a time to reflect and go over some new goals for myself, where I want to be and what I want to do. That's a massive step for me."

END_OF_DOCUMENT_TOKEN_TO_BE_REPLACED

Connacht supporters will be hoping that O'Halloran, who is out of contract next summer, opts to take that next step with his home province. There has been talk of Munster seeking to bring him in as a replacement for the departing Zebo while there would be plenty of interest in a proven fullback in England and France.

The next few weeks will be tough watching but O'Halloran will tune in as Ireland take on South Africa, Fiji and Argentina. The next two years ahead are massive for each and every Irish player with World Cup ambitions and O'Halloran will be targeting a run of form over the festive period to make the strongest possible case for Six Nations selection.

popular
Green Party representative calls for a temporary ban of stag and hen parties in Ireland
Here's how to make €9-11 on Revolut in just a few minutes
Pop Idol star Darius Campbell Danesh has died, aged 41
Off-duty Garda arrested in Tipperary on suspicion of drink driving
Dublin Bus passenger assaulted in suspected homophobic attack
QUIZ: You won't be able to correctly guess the meaning of all these words
Woman dies and four others injured after crash in Mayo
You may also like
4 months ago
Scottish Parliament official dies during rugby game in Dublin
5 months ago
Every Guinness fan needs to try these brand new experimental beers
6 months ago
"Samaritans saved my life" - Brent Pope praised for honest interview on Tommy Tiernan Show
1 year ago
Craig Casey and Johnny Sexton combination backed for Italy clash
1 year ago
Defence grows for Billy Burns after one of the roughest days of his rugby career
1 year ago
Major upside to Ireland's Six Nations challenge that should make all the difference
Next Page