Tragedy struck the world of baseball on Sunday following the deaths of two Major League Baseball stars in two separate car accidents in the Dominican Republic.

Yordano 'Ace' Ventura, a pitcher with the Kansas City Royals, died aged just 25 after he was involved in a car accident in his native Dominican Republic on Sunday. END_OF_DOCUMENT_TOKEN_TO_BE_REPLACED

"He was so young and so talented, full of youthful exuberance and always brought a smile to everyone he interacted with. We will get through this as an organization, but right now is a time to mourn and celebrate the life of Yordano." 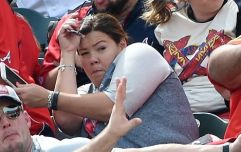 PIC: Absolute hero in stands saves a boy from being smacked by a flying baseball bat

END_OF_DOCUMENT_TOKEN_TO_BE_REPLACED

In a separate car accident, which also occurred in the Dominican Republic on Sunday, Andy Marte tragically lost his life.

He spent the last two seasons playing with KT Wiz in the KBO League in Korea.

Sad to learn of Andy Marte's death this morning. He was a genuine person who always greeted you with a warm smile.

popular
Met Éireann updates weather warning for entire country as temperatures set to fall to -6
Céline Dion diagnosed with incurable neurological disease
The "eighth best movie ever made" is among the movies on TV tonight
5 deadly destinations for a last-minute city break this winter
Jennifer Lawrence sparks controversy by saying she was the first woman to lead an action movie
Star of Horrible Histories says cast arguably did 'blackface' by getting spray tans to play Egyptians
Mia Khalifa claims seaside town is better than Miami
You may also like
3 years ago
WATCH: Major League Baseball player visibly shaken after he struck a child with a ball
7 years ago
VIDEO: Incredible scenes as baseball player attacks his teammate in the dugout
7 years ago
Video: An American TV channel were obsessed with these Irish people at a baseball game
7 years ago
Video: Super-cool Dad makes one-handed catch at baseball game, all while feeding his baby
7 years ago
Pic: A very funny mistake in this US newspaper headline should give you a laugh
7 years ago
Video: Baseball fan chugs beer like a boss after catching foul ball in cup
Next Page