Has everyone forgotten the World Cup semi-final already?

Apparently, a significant number of the 50,000 or so professional footballers tasked with selecting the FIFA FifPro World XI for 2014 have conveniently forgotten that game, where Luiz was particularly bad in Brazil’s shocking 7-1 defeat to eventual World Champions Germany.

Despite his performance in that game and a few more high-profile lapses of concentration for which he’s renowned throughout the year, Luiz still managed to find his way into a team alongside Ballon d’Or nominees Manuel Neuer, Cristiano Ronaldo and Lionel Messi amongst others. 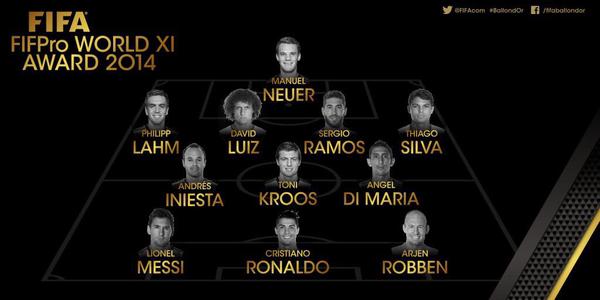 It was a decision that very few people on Twitter could understand.

FIFA team of the year includes David Luiz. We all dreamt that 7-1 semi final, didn't we? Aaron Paul on @lstwrd now by the way.

After naming David Luiz in team of the year, the FIFPro website has crashed ..

How did David Luiz and Thiago Silva make the team of the year ??Horrific World Cup's #joke
skysports5

popular
People want "offensive" Crown Paints advert banned after attracting hundreds of complaints
Netflix has just added 23 very big movies to its library
Human remains found in suitcases are the bodies of two children
Disney+ has just added 10 big movies to its library
Here's how to make €9-11 on Revolut in just a few minutes
QUIZ: Can you identify the famous song from the opening line?
The prequel to one of the best twists of all time and 7 more movies & shows to watch this weekend
You may also like
1 week ago
The JOE Friday Pub Quiz: Week 306
2 weeks ago
Rebekah Vardy breaks down in tears in first TV interview since Wagatha Christie defeat
1 month ago
Gary Lineker says he suffered racist abuse during football days due to "darkish skin"
2 months ago
Merseyside police defend ‘exemplary’ Liverpool fans tear gassed by French police
2 months ago
BBC trainee accidentally posts message mocking Man United live on TV
2 months ago
Kurt Zouma charged with three animal welfare offences
Next Page