WATCH: Tyson Fury's post-fight interview is a powerful message for anyone suffering with mental health issues

"Everybody knows I won that fight."

In the hours following the Tyson Fury V Deontay Wilder fight, people are still arguing back and forth over whether either of the fighters were robbed of their victory by declaring the bout a draw.

In the post-fight interview, Fury took the time to talk about his personal problems that he has faced in the last few years, and the inspiration he needed to power through and, as he puts it, win the fight: 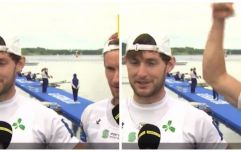 END_OF_DOCUMENT_TOKEN_TO_BE_REPLACED

"Everybody out there who has the same problems I've been suffering with, I did that for you guys. You know the truth. Everybody knows I won that fight.

"And if I can come back from where I've come from, then you can do it too. So get up, and lets to do it. Seek help and lets do it together as a team. I did it for you guys."

30 seconds straight down the camera, straight from the heart of @Tyson_Fury... ♥️ pic.twitter.com/vgZOag6t3b

popular
Richard Madeley apologises after calling Sam Smith 'he' and bungling guest's pronouns
Harvard study reveals how many times men should ejaculate each month to stay healthy
Annie Wersching, best known for role in TV series 24, dies aged 45
Parents left in shock after gorillas start mating in front of kids at zoo
Colin Farrell shouldn't win the Oscar this year
The JOE Friday Pub Quiz: Week 331
S Club 7's Hannah Spearritt and children left homeless after being forced from home before Christmas
You may also like
6 days ago
Love Actually star reveals incredibly emotional behind-the-scenes story
2 months ago
David Harbour reveals the one stunt that went hilariously wrong in Violent Night
2 months ago
The Menu works because it makes fun of absolutely everyone
2 months ago
The West Wing actor shares hilarious response to Piers Morgan interview offer
3 months ago
WATCH: Even the director of The Banshees Of Inisherin was shocked by his own movie
3 months ago
WATCH: The stars of The Woman King on why Irish audiences need to see the movie
Next Page