We are getting ahead of ourselves slightly here. Pearl Gonzalez is not a UFC fighter... yet.

On Saturday night in Buffalo, Gonzalez is set to fight fellow straw-weight Cynthia Calvillo on the main card of UFC 210.

All that was thrown into doubt, earlier today, when the New York State Athletic Commission informed her she would not be able to fight because she had breast implants.

END_OF_DOCUMENT_TOKEN_TO_BE_REPLACED

The 30-year-old was coming into UFC 210 for her debut after a six-fight winning streak and she was beyond gutted when the news was broken to her.

Former UFC bantamweight champion Miesha Tate, who has implants, fought at UFC 205 in Manhattan's Madison Square Garden last November so many pundits and fans were hoping for a rule reversal.

Well, we're happy to say that there has been:

STOP listening to web sites and whoever. If u don't hear it from us it's probably not true. THIS FIGHT IS ON!!!! pic.twitter.com/tnbzWyAz5w 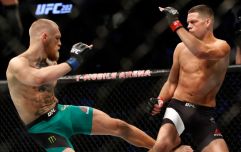 END_OF_DOCUMENT_TOKEN_TO_BE_REPLACED

While UFC president Dana White - a man who once said Anderson Silva would NOT fight Daniel Cormier at UFC 200, minutes before the promotion officially announced it - is prone to bombastic statements, his latest is on the money.

Gonzalez said the UFC got the commission in touch with her doctor to get her cleared.

Dramas done for one day - and there were certainly enough - Gonzalez can now get some fluids back in, weight back on and get ready for her big debut.

The Big Reviewski || JOE · TBR Spotlight: The Falcon and the Winter Soldier Episode Five - 'Truth'
popular
The 50 most iconic songs of all time* have been revealed
QUIZ: Can you answer all of Sinead and Daniel's questions on the Irish Celebrity Who Wants to be a Millionaire?
People think they've figured out the ranking of the viewers on your Instagram Stories
PICS: The man with the biggest penis in the world has one unbelievable problem with it
The JOE Friday Pub Quiz: Week 239
The Falcon and the Winter Soldier has the most powerful scene in MCU history
QUIZ: You'll find it hard to name all these towns from their Irish name (part 2)
You may also like
2 years ago
WATCH: New footage released of Conor McGregor allegedly smashing fan's phone in Miami
2 years ago
Dillon Danis has finally explained what happened at the UFC 229 post-fight brawl
2 years ago
Conor McGregor teases third fight with Nate Diaz
2 years ago
Conor McGregor agrees to a fight against Donald Cerrone
2 years ago
WATCH: UFC fighter Uriah Hall's speech about mental health is powerful
2 years ago
New deal will see UFC remain on BT Sport
Next Page